View our research projects at http://conceptlab.com 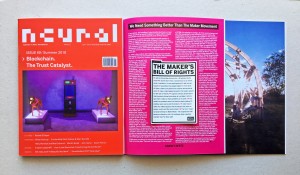 Two short-term projects were completed in early 2018 that directly responded to the maker movement. The first was The 2018 Maker’s Bill of Rights, an argument for hackerspaces and makerspace initiatives to pay more attention to women’s issues and commercial exploitation, and less to technologies. This was released as a free sticker which was disseminated directly to electronics manufacturers, university labs, hackerspaces, library makerspaces, schools, and individuals. The second project was We Need Something Better Than the Maker Movement, a one-page written document to further contextualize the Bill of Rights sticker and invite the public to participate in revising the sticker. This piece was published by the Italian publication Neural, who distributed the physical sticker in the centre of the essay as a pasted-in insert in the magazine. The impact of this experiment in knowledge mobilization was extensive, with many institutions printing and posting the Bill of Rights or the sticker in their labs, including Sparkfun Electronics, the Raspberry Pi Foundation, University of Sussex, USC, UCSC, UCI, Winchester School of Art, Hogeschool Rotterdam, Concordia U, York U, Indiana U, U Sask, U Michigan, U Waterloo, U Dundee, U Montreal, Carnegie Mellon, Edinburgh Napier, Olin College, Rensselaer and many others. More documentation: http://makermanifesto.com.