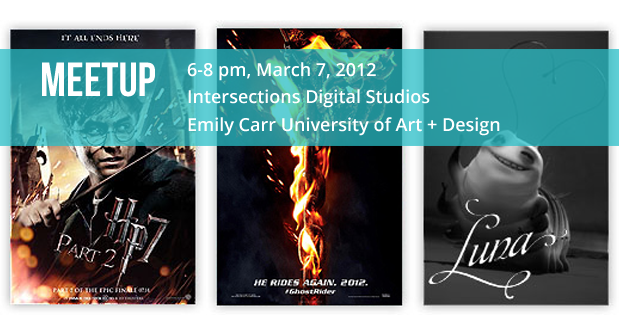 This event is FREE and open to the public, but space is limited!

Gener8 is a successful company that has developed a positive reputation in a challenging industry. The conventional wisdom in the film industry and popular press seems to be that the only way to produce a quality stereoscopic 3D film is to shoot with native stereo camera rigs. Stereoscopic 3D post-conversion is generally looked upon as a lower-quality alternative. We suggest that 3D conversion can produce high quality results; in fact a more useful conversation is “what is the right tool for the job?”

Tim Bennison and Mark Lasoff from Vancouver-based Gener8 will present an overview of their company’s stereo conversion work on such film franchises as Harry Potter, Priest, and Ghost Rider.  They will give a backgrounder on the state of the conversion industry and then describe Gener8’s conversion process. They will also be discussing production issues such as integrating conversion with visual effects and native stereo 3D shots, and the logistics of converting a full-length feature film. There will be the usual draw for a great door prize, so don’t forget to bring your business cards for a chance to enter! Stay tuned for more upcoming Meetup events from the S3D Centre.

Tim Bennison joined Gener8 as Chief Operating Officer after serving as Executive Producer at Radical Entertainment. At Radical, he co-created several award-winning video games including Prototype, The Hulk and Incredible Hulk: Ultimate Destruction. Tim also worked as Radical’s Vice President of Technology, responsible for directing technical development for all production teams and overseeing research efforts. Prior to joining Radical, Tim worked at Alias|Wavefront, where he built advanced surface construction tools, implemented rendering systems on a variety of custom hardware, and designed a digital video 3D animation system. A graduate of University of Waterloo with an M Math degree in Computer Graphics, Tim was an associate professor in Computer Science at Lincoln University in New Zealand.
http://www.gener8.com/

Mark Lasoff is an Academy Award-winning Digital and Visual Effects Supervisor. He has worked on numerous visual effects-driven blockbusters including Avatar, Titanic, Apollo 13, The Matrix 2 & 3, The Hollowman, and True Lies, to name a few.  Mark has worked at many of the world’s leading visual effects companies including Digital Domain, Sony Pictures ImageWorks, Disney Feature Animation, and Electronic Arts. Beyond feature films, Mark has supervised two seasons of television visual effects for Syfy’s Sanctuary, and several large-format stereoscopic films for theme parks around the world, including the award-winning Terminator 2/3D.  Mark also served as the franchise Art Director for EA’s Medal of Honor. Mark began his visual effects career as a software developer for Total Recall, where he developed rendering software for the x-ray skeleton sequence, which earned the film a Special Achievement Academy Award for the Best Visual Effects. Mark graduated with a M.S. in Computer Science from the University of Maryland, and a B.S in Computer Science and a Bachelors of Electrical Engineering from the University of Delaware.
http://www.gener8.com/