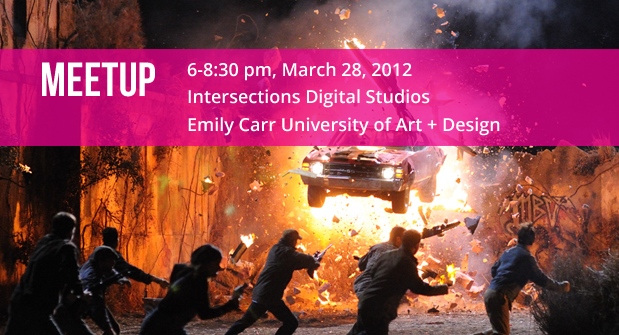 This event is FREE and open to the public, but space is limited!
Register now at: http://s3dmeetup6.eventbrite.com/
There is discussion among industry professionals about whether it is more fitting to describe the format of Stereoscopic 3D as a tool, or a medium. Theatrical directors also debate the advantages and disadvantages of using subtle or aggressive 3D when creating a depth script for a film. Director Patrick Lussier is known for using 3D like a roller coaster ride where the audience can experience its full range of potential, and he explores the 3D formats’ immersive and fun qualities. Lussier’s presentation will feature clips from two of his films, My Bloody Valentine 3D (2009) and Drive Angry (2011) and he will describe the pre, production and post process of directing these films, challenges shooting on location and technical advancements that occurred between films.

A new door prize from Annex Pro, Glyph Technologies 500GB PortaGig 50 Portable Hard Drive (7200rpm). This is valued at $200.00 USD so don’t forget to bring your business cards for a chance to enter!

S3D Centre Meetup ::  S3D for Theatrical Film
This event is FREE and open to the public but space is limited!
Register: http://s3dmeetup6.eventbrite.com/

Patrick Lussier is a Vancouver born writer, director and editor who has established himself as one of the most versatile talents in the horror and thriller genres. Lussier started his career as an editor, working with iconic genre filmmakers including Guillermo Del Toro and Wes Craven. His credits for them include Del Toro’s Mimic, Craven’s Scream, Scream 2, Scream 3 and Red Eye. He made his directorial debut withProphecy 3, starring Christopher Walken for Dimension Films, then went on to direct the Wes Craven-produced Dracula 2000, starring Gerard Butler, along with the film’s two sequels.  Lussier recently directed the 3D film Drive Angry for Summit Entertainment, which was released in February 2011, starring Nicolas Cage, Amber Heard and William Fichtner. Prior to that, he directed 2009’s breakout hit My Bloody Valentine 3D – a $16 million film which grossed over $100 million world-wide – and ranks as one of the highest grossing slasher films of all time.

Lussier also worked as a visual consultant for Dimension Films on The Brothers Grimm, which starred Matt Damon and Heath Ledger; as well as on Paul Schrader’s Dominion; Jonathan Liebesman’s Darkness Falls;Exorcist: The Beginning; 54; The Return; Whisper and The Eye. He also served as a music consultant onReindeer Games, which was directed by John Frankenheimer and on Kurt Wimmer’s Equilibrium, which starred Christian Bale. Lussier recently teamed up with writer and producer Laeta Kalogridis (Martin Scorsese’s Shutter Island; James Cameron’s Avatar) on a number of projects. Most recently, he edited the Timur Bekmambetov-produced Apollo 18, which released in August of last year.

Annex Pro is a value-added reseller, specializing in software and hardware for the entertainment industry in Vancouver, BC. We provide technical support, training and consulting for studios creating animation, games, film/TV, visual effects, audio post and music, as well as education and corporate media. We have been supporting the local entertainment industry in Vancouver, BC since 1983, and are proud of our community involvement, which include scholarships, sponsorships and participation in local customer events. Click here for a list of our authorizations. We are here to help make your project a success. Contact us today for a no-obligation consultation.

Thank you to GRAND NCE for their sponsorship of the event!

GRAND is a research network and commercialization engine whose goal is to address complex issues in digital media and transform multidisciplinary research into user-centred solutions. GRAND will explore the use and application of digital media in a variety of settings including entertainment, healthcare, education, environmental sustainability, and public policy.

GRAND is a federally-funded Network of Centres of Excellence supporting 34 research projects divided into5 cross-pollinating themes involving researchers at 25 universities across Canada with more than 60 industry, government, and nonprofit partners.

NSERC aims to make Canada a country of discoverers and innovators for the benefit of all Canadians. The agency supports university students in their advanced studies, promotes and supports discovery research, and fosters innovation by encouraging Canadian companies to participate and invest in postsecondary research projects. NSERC researchers are on the vanguard of science, building on Canada’s long tradition of scientific excellence.