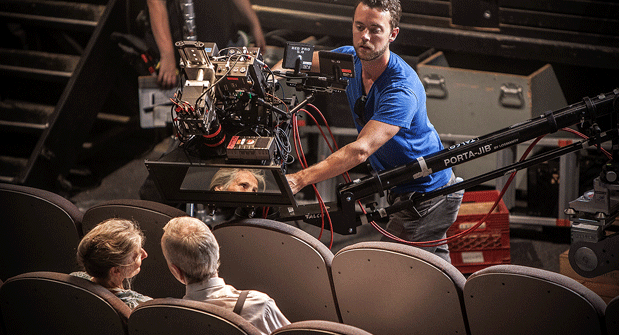 As a National Centre of Excellence, the S3D Centre at Emily Carr is focused on advancing the art of stereoscopic 3D. As an applied research partner, TELUS is interested in supporting research outcomes that promote an understanding of how to create high quality S3D content for television audiences.

With the emergent market of S3D television, producers are faced with the challenge of learning how to develop high quality S3D content. S3D demands an entirely new creative approach. Producers, directors, camera operators, DOPs, writers, editors must all learn the parameters of an emergent aesthetic language while simultaneously developing an awareness of the possibilities and limits inherent to S3D TV and cinema.

Movies have been filmed and also projected at 24 frames per second since the 1920’s, and it has become widely known as the ‘cinematic aesthetic’. However, due to the slower shutter in recording frames at only 24 per second, certain motion artifacts such as blur and light strobing are noticeable. Motion artifacts are of concern in stereoscopic 3D productions because they have been shown to increase viewer discomfort and lead to a less immersive experience, the opposite of what most S3D productions are trying to accomplish. Motion artifacts are greatly reduced at higher frame rates (HFR) resulting in a more comfortable viewing experience with hyper-real smoother images.

We are researching not only the standalone benefits of higher frame rates in S3D, but also the effect of VARIABLE HFR on aesthetic and immersion in the context of a single narrative. Advances in digital projectors, software, and consumer cameras have made it genuinely possible to consider combining frame rates in a single production to achieve a variety of effects. If the technology existed to capture and display a complete narrative at multiple frame rates both standard and higher, what would be the creative benefits/drawbacks of doing so? Would the use of HFR as a ‘tool’ in this way change the immersive experience for the viewer? We suspect that the question of whether to use HFR in a stereoscopic 3D film within a narrative context depends largely on the content and creative intent of the film itself. We are creating the short film “l’âme soeur (Soul Mate) 3D” as a means to explore these questions and see what the results are for both 3DTV and Cinema.

HFR Benefits for the Entertainment Industry
Sterescopic 3D HFR creates new possibilities in content creation, which is of interest to those who make content or purchase/distribute content. Individuals and companies wanting to create content in HFR will need specialized equipment, and this will result in a new market opportunities. Theatres committed to projecting HFR productions will attract audiences not simply because of novelty, but because HFR is the highest quality digital projection available. There are distinct benefits to consumers providing feedback on how they wish to view content, and researchers improving the variety of viewing methods available.

HFR Benefits for Academia
HFR creates a multi-faceted dialogue for researchers. Sub topics include: Human perception of higher frame rates; HFR influence on viewer comfort, immersion, narrative understanding, and situational awareness in virtual reality.  In the engineering field, of interest would be the research and development of hardware needed to acquire and display content.  In computer science, new algorithms could be developed to process and analyze variable frame rate content. HFR also provides a new area of investigation in film theory and production.

HFR Benefits for the Audience
Reception from audience members on early HFR content has been mixed which is unsurprising.  The introduction of a new standard often needs a period of acclimation. At first, curiosity about what HFR looks like will drive audience numbers.  If indeed HFR creates a more comfortable viewing experience, audience members previously turned off from watching S3D may choose to give it another go. HFR will not only be limited to cinema.  It may penetrate the TV market first due to a very receptive audience for sports and nature programs for which HFR provides a real, true to life aesthetic.