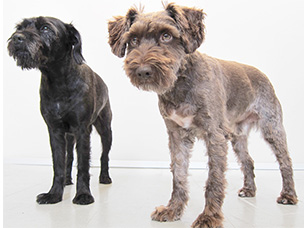 Animal Lover is a body of work by artist Julie Andreyev that converge on questions and critiques addressing contemporary relationships between humans and other-than-human animals. The projects use interspecies collaborative modes to reveal the expressive, emotive, communicative and creative life of other animals. The Animal Lover projects contribute towards an ethics of compassion and regard for the intrinsic worth of other-than-human individuals in contrast to more conventional  beliefs about nonhumans as being ‘less than human’ and as resource for human use-value. The Animal Lover projects are often produced in collaboration with companion dogs Tom and Sugi where respect, fun and challenge are employed in the process. The dogs participate directly in the research and content creation of the work by suggesting ideas for projects and by determining the material for production. Also, aleatoric and improvisational methods are used that provide for chance, open-ended expectation, surprise and learning.

For Scratch Theremin – EPIC Tom, Andreyev works with canine Tom using interactive software and a theremin to produce a collaborative improvisational interspecies performance. The project advances methods of improvisation and active listening to propose live audio soundscapes that mesh canine  sounds with electroacoustic practice. In the process of developing this performance, a custom built theremin, that incorporates a rug as an interface, was created to allow Tom to use scratch and digging gestures to create sounds. Tom likes to accompany his playing with a diverse range of vocalization. These studio performances are audio recorded for use later in the live performance where they are remixed into a new experimental improvisational soundscape. Here, Andreyev accompanies Tom’s vocals and rhythms with her own live theremin and software performance. The performance software developed with the support of a grant from the Social Sciences and Humanities Research Council (2003-05) and adapted with a Media Arts grant from the Canada Council for the Arts (2011). 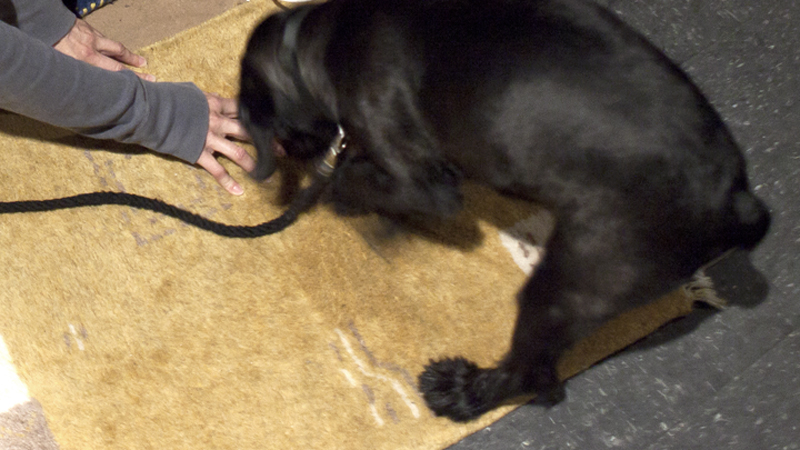 Andreyev’s current PhD research, titled The Compassion Project, aims to participate in and contribute to current pressing discourse on human relations with the other-than-human. Despite widespread knowledge of the profound impact humans are having on nonhuman animals and the environment, contemporary culture perpetuates destructive activities without taking significant action. For centuries, nature and nonhumans have been the casualties of anthropocentric outlooks that favor humans over other animals. At the core of these beliefs is the idea that humans are distinct and separate from nature, and superior to other beings. Today our relationship to nonhumans has largely been reduced to forms of production, management and consumption. The language and systems we use to contain and position the nonhuman —zoos, parks, nature preserves, wildlife management— demonstrate this separation of the human with respect to other animals and nature. Heesoon Bai suggests that the current ecocide “…is due to humanity’s inability to perceive and feel the intrinsic worth of the other —in this case, nonhuman beings”. What are the ontological roots of belief on the human separation from other animals and nature, and what is the research on compassion within various academic fields, religions and beliefs that contributes to more ethical and positive relations of humans with other species, and therefore towards the larger ecological context?  The investigation looks to: environmental studies that debate human relations with the natural environment; critical animal studies and cultural studies that create links between discourses on human nonhuman relationships; philosophical discourse that looks at the ontological roots of anthropocentric views and proposes an ethics of intrinsic worth towards nonhumans; Eastern religions and indigenous mythology that suggest more sustainable attitudes of caring and compassion towards other species and the environment.

The Compassion Project part of the new PhD program within Graduate Liberal Studies, Simon Fraser University. The Compassion Project is supported by: a Doctoral Award from the Social Sciences and Humanities Research Council (2013-2016); the Provost Prize of Distinction, SFU; a Special Graduate Entrance Award, SFU.