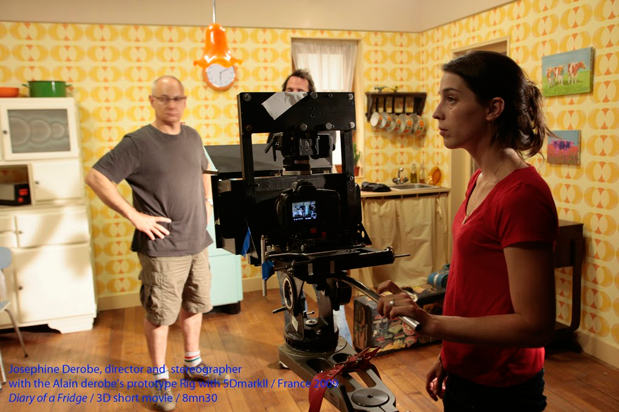 The S3D Centre at Emily Carr with the support of GRAND NCE & the Consulate General of France in Vancouver presents a very special event: The Art of 3D Storytelling with special guest Joséphine Derobe. This Masterclass will introduce the concepts of scriptwriting, directing, and a variety of storytelling techniques that are unique to Stereoscopic 3D productions. Joséphine Derobe is an award winning filmmaker and 3D Stereographer currently based in Paris, France. She first began working as a reporter and photographer, and her career in Stereoscopic 3D began in 2006 when her father Alain Derobe (also a Stereographer) suggested she learn about the industry. She fell in love with the medium during her first production and at that point switched her full time job to learn the art of S3D.

In the past six years, she has worked on S3D feature films, corporate films, short films and commercials as a Stereographer. One of her achievements to date has been the creation of the Natural Depth Method (also known in the industry as the Derobe Method) an innovative 3D filmmaking technique that she co-created with her father Alain Derobe. As a S3D Director, Joséphine is very interested in the 3D language and attempts to explore the full capacity of this wonderful medium in an artistic way.

Her first short film as writer, director and stereographer is called Diary of a Fridge (2011). This award winning film features live action and stop motion and having been selected in many 3D film festivals during 2011, it has won the grand prize at International Rimouski Festival (Quebec/Canada ), 37th NSA Convention (Colorado /USA), Be-Film Festival (New-York / USA), and Dimension3 Expo (Saint-Denis/ France).

The Masterclass begins Friday, February 10th at 7pm for a screening of the award winning film “Pina” at The Park Theatre (3492 Cambie Street). Masterclass attendees receive VIP seating and Joséphine will be present to introduce the film and answer a Q&A.

The Masterclass continues Saturday, February the 11th from 10am to 3pm where Joséphine will present on the Art of 3D Storytelling. Joséphine balances her work in both technical and artistic roles, which makes her especially talented and very popular within the filmmaking industry. Within this intimate class size, attendees will be encouraged to interact with Joséphine as she demonstrates a variety of techniques and discusses theory. She will present her short film, “Diary of a Fridge”, and will show clips from the ‘Making of Pina’, and other films she has worked on. Joséphine will answer questions and provide some suggestions for successful S3D projects for everyone to keep in mind for their first or next S3D endeavour.

Filmography as a Stereographer:

Filmography as a Director:

* Currently in production for a 2012 short film.

The Art of 3D Storytelling with Joséphine Derobe.

$60 registration fee includes the evening screening of “Pina” with Joséphine Derobe at The Park Theatre, a five hour workshop, and a full lunch.

Emily Carr’s S3D Centre is a national centre of excellence dedicated to advancing the art of stereoscopic 3D through research, education and training.

Thank you to GRAND NCE for their sponsorship of the event! GRAND is a research network and commercialization engine whose goal is to address complex issues in digital media and transform multidisciplinary research into user-centred solutions. GRAND will explore the use and application of digital media in a variety of settings including entertainment, healthcare, education, environmental sustainability, and public policy. GRAND is a federally-funded Network of Centres of Excellence supporting 34 research projects divided into 5 cross-pollinating themes involving researchers at 25 universities across Canada with more than 60 industry, government, and nonprofit partners.