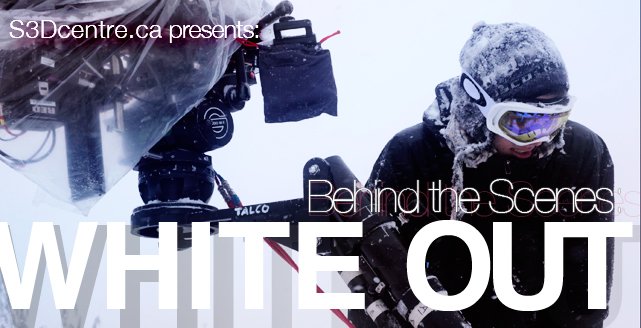 When we decided to shoot for a day on Grouse Mountain, we knew there might be snow and wind but there was a lot of snow and wind. Director and Stereographer, David Tenniswood didn’t let that deter us. If the mountain was open then we were shooting. The plan was to be on the mountain, in position and shooting by 930 -10. The morning proved to be grueling as the wind and snow were particularly strong. We set up camp and our first camera position next to the first big transition jump in the Quicksilver Snowboard Park. There was a small tent for set up, alignment and monitoring.

White Out 3D | Behind the Scenes Video from Oliver Millar on Vimeo.

Rig 1 was two RED Epic’s with 25mm Zeiss Super speeds. Our DoP, Oliver Millar, had spent sometime in the back with the technicians from Panavision figuring out which 2 lenses were optically close enough to shoot with. The cameras we mounted on a modified Hurricane rig. The rig was outfitted with the bolster bracket, allowing for heavier cameras and 2 modified Arri dove tails. Typically the Hurricane has Manfrotto quick release plates, but these were not sufficient to hold the REDs. Because of all the jostling, moving and adjustments this experimental setup required, we need on set monitoring. We built up a custom carrying case with an 23″ LG monitor. To mux our signal we used the Matrox MC100. A super handy flip flop box that outputs 3D over dual SDI or HDMI.

Rig 2 was a pair of Si2Ks on a fig rig. Emily Carr has a pair of Schneider 8mm machine lenses that open to f2. We were able to get some decent material with this rig. We mounted a 3rd GoPro with the usable image area taped off to give the operator some feed back on what he was shooting. The Cinedeck recorder was wired into his back pack.

Rig 3 and 4 were two 3D GoPro setups. These we mounted to ski poles and gave them to some of the pro riders to shoot with. I can’t express how great these little cameras are. We go some great material with them. Very excited to get some of the Hero 2 cameras. The final short is close to completion and will be released shortly. If the post production gods are good we will have a screening at the next 3D Meetup / Master Class. More details to follow on that one. The project was a great first foray for the S3D Centre for an on location shoot. Many thanks go out to Grouse Mountain Resort, Oliver and Dave of Atomized Creative and the crew and riders who made it all happen. Special thanks to the Mackenzie Sheppard who put this together.