Side by Side 3D Time Lapse Tests 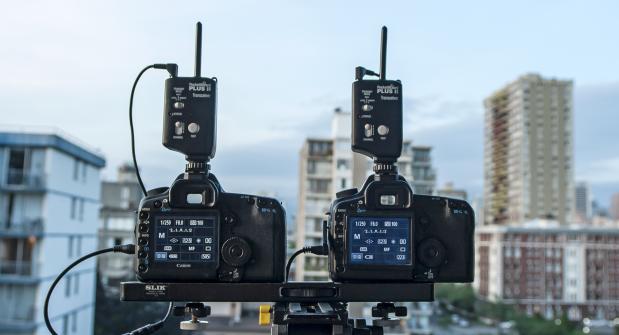 Under the direction of Sean Arden, with special thanks to Dafna Vallejo.

How can you shoot a side by side 3D time lapse using two Canon 5d Mark II (or any other DSLR camera)?

How do you sync the two cameras?

Capture still pictures at regular intervals with two Canon 5d Mark II (left and right eye) for a side by side 3D time lapse.

Sync the two cameras and test the alignment with and without a 3D monitor.

Process the files with After Effects to produce the final 3D sequence.

One Canon 7d, only body without lens

DSLR cameras are the most portable and cheapest devices available on the market to shoot 5k 3D still RAW images.

Even though setting up alignment with a 3D monitor is recommended before shooting, it is still possible to get good results without using one. After Effects is very effective as a tool to correct most alignment issues.