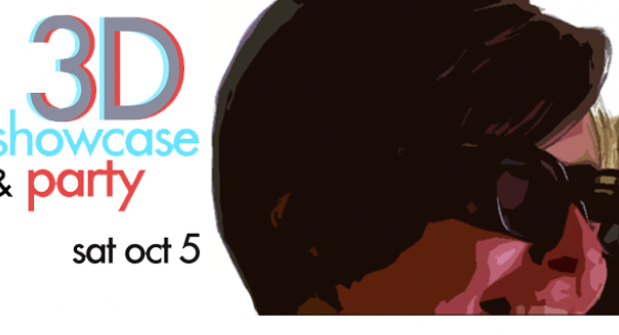 Please join us in an evening of panels, films, food, drink, prizes and networking! The 2013 3D Showcase & Party by the S3D Centre + International 3D & Advanced Imaging Society celebrates the most recent creative and technical advancements in stereoscopic 3D filmmaking.

2nd UPDATE: Bruce Alcock of Global Mechanic will be on the panel with his short animated film “Impromptu” in stereoscopic 3D!

UPDATE: James Stewart of Geneva Film Co will be on the panel with short stop motion animation “Foxed!” in stereoscopic 3D

We are joined this evening by special guests, some of whom have films screening in the short film programs at VIFF. These award winning filmmakers will describe their creative process, the financing, logistics and technicalities of making 3D animation + live action productions.

Quantel will be present at this event to show you the brand new Pablo Rio acquired by the S3D Centre- a system capable of HFR, 4K and S3D realtime playback!

There will be a prize given away this evening- a Fuji full HD 3D camera courtesy of Quantel!

GRAND NCE is a research network and commercialization engine whose goal is to address complex issues in digital media and transform multidisciplinary research into user-centred solutions. GRAND will explore the use and application of digital media in a variety of settings including entertainment, healthcare, education, environmental sustainability, and public policy.

GRAND is a federally-funded Network of Centres of Excellence supporting 34 research projects divided into5 cross-pollinating themes involving researchers at 25 universities across Canada with more than 60 industry, government, and nonprofit partners.

NSERC aims to make Canada a country of discoverers and innovators for the benefit of all Canadians. The agency supports university students in their advanced studies, promotes and supports discovery research, and fosters innovation by encouraging Canadian companies to participate and invest in postsecondary research projects. NSERC researchers are on the vanguard of science, building on Canada’s long tradition of scientific excellence.

NRC-IRAP We provide innovation and funding services customized to your specific needs. Our goal? To help you accelerate the growth of your business through innovation and technology. See more athttp://www.nrc-cnrc.gc.ca/

The Canadian Chapter of the International 3D & Advanced Imaging Society is a community of content creators and professionals whose mission is to develop the arts and technologies of 3D, advanced imaging and its innovators from within Canada. Activity takes place through educational opportunities, public showcases, awards ceremonies and group lobby efforts to realize these goals.

With over 60 companies and 800 professional members in 20 countries, the Society is open to individuals and organizations active in moving 3D and advanced imaging to an exciting new era of creative achievement and consumer support. Learn more about joining the Canada Chapter.