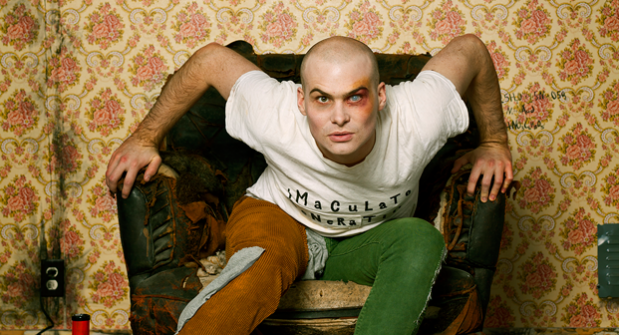 Nick Kalish is a 4th Year Film Video and Interactive Media student at Emily Carr University of Art + Design. Justin Alm interviewed Nick prior to the shooting of HOTBOX – the first undergraduate film shot in S3D at Emily Carr.

What are you guys doing here today?

We are testing out the “Derobe” method for my film, and tracking a person that is walking back and forth in order to keep them on screen plane, and in my film there is a conceptual reason for it. I am trying to lead my audience into the mental state of the character. I am hoping to use the “Derobe” method to achieve that, by keeping the character on screen plane while effectively having the set change its perspective to accommodate him.  It connotes a sense of narcissism and an egocentricity that is very important to the story and that character.

What is the story about?

HOTBOX is a psychological character study about a disturbed boy. I hope to develop a discourse around school shooters and adolescent mass murderers, and what accounts for such a profound annihilation of youthful innocence, how someone could transform from a child into a monster. Aesthetically, I am exploring various spaces.  I am exploring theatrical space. How S3D is sort of a return to theatrical space.  As well as the capacity for various 3-dimensional and 2-dimensional aesthetic conventions to portray mental space, how distorted perceptive and depth perception or different variations of perspective can lead you into the reality of the character.

So S3D is an essential component for your film?

Definitely. I am not going to release a 2D version of the film. I may make compromises later on, but for my first S3D film I want to make something that is entirely self reflexive and reliant on the medium itself. It is not something that will be the same in 2D. It is a completely different medium and should be regarded as such. Things that work best in S3D are very different than 2D conventions. Much more time can be spent within locked frame because your eyes are exploring it, looking around it, absorbing it in a way that doesn’t happen in 2-dimensional imagery. In 2D, we expect to a cut every couple of seconds because that is the pace that we are accustomed to.  The brain processes the majority of a 2D image within seconds, while stereo depth cues take longer to process. Thus S3D allows us the opportunity to slow things down.  That, along with a return to volumized theatrical space, is why I am choosing to maintain a fixed perspective for this film.

Did you write this film?

I co-wrote it with my lead actor, Jon Lachlan Stewart.

Were the technical components of the production’s concept considered while it was being written?

I actually had all of the technical components predominantly figured out before I even started writing. I knew exactly what I wanted it to look like. The writing portion was primarily the development of the monologue. However I did weave the 3D aspect of the film into the story in a self reflexive manor. For instance, the main character has one blind eye, a birth defect or sorts. It is ironic because he cannot perceive depth.

Who is the audience that you are hoping to reach with a film like this?

It is potentially going to be very controversial, I know that already. It’s a bit twisted. It is something that I am going to have to defend it in a lot of different ways, and that is why I have done my homework on the topic. School killers, bombers, it is a very touchy subject. I wanted to make sure that while I am very fascinated by these sort of characters who make light of their situation while the are in the midst of doing something terrible, I want to make sure that I am not glorifying them as much as I am attempting to understand them.  Though to me their criminal psychology is titillating, and looking at recent film and television content, I don’t think I am alone. So in that case, I am looking at a very broad audience. Anyone who enjoys watching characters like Hannibal Lecter or Jack Torrence should appreciate this film.  I am also making it with the S3D community in mind.  There are brief moments that I intentionally stress the eyes through divergence for dramatic effect, which may polarize peoples opinions as well. It will be interesting to hear what the 3D folks have to say about that.

How are you funding this film?

I am funding the film through Kickstarter.com. Kickstarter is an awesome website for raising money for projects, in a central location with an all or nothing funding model. Basically I have until January 8th to meet a funding goal of $1500 or we don’t get anything, and we really need the help. They aren’t just donations though, I am offering awesome backer rewards like the fantastic poster we have created, copies of the film with anaglyph glasses, as well as associate and executive producer credits on the film itself. Check it out! http://www.kickstarter.com/projects/nickkalish/hotbox

Is there anything else you would like to say?

I would just like to thank the S3D centre at Emily Carr for all of their generosity and support.  They welcomed me with open arms as both a content creator and an intern, donating their fantastic resources and wealth of knowledge. I would love to continue my relationship with them and help them any way I can to become the renowned establishment they deserve to be.

Check out HOTBOX at http://synapscinema.com/hotbox