S3D Centre in the news 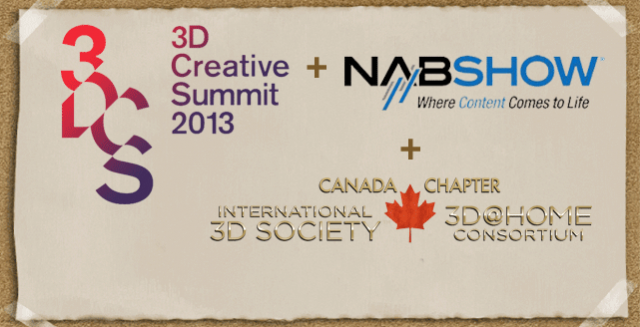 The S3D Centre is going to be present at three international venues March-April 2013.

The first is the 3D Creative Summit in London, UK March 27-28 2013. The S3D Centre’s Denise Quesnel will be presenting in the 3D Research Programme on “An exploration into the creation of variable frame rate (VFR) 3D narrative productions”. If you have been following our research into variable high frame rates, this is the perfect place to see the video example and hear about the project dissemination. This presentation wraps up both the Programme and Summit on Day 2 (March 28). Be sure to get in touch if you are going to be at the Summit and wish to connect.

Next event is NAB Show 2013 where S3D Centre’s Sean Arden & Alan Goldman will be attending. From April 6-10th they will be walking the exhibit floor, networking and attending the conferences. If you wish to meet up with them in Las Vegas, also get in touch with us.

And finally, the Canada Chapter of the 3D Society is currently being organized with new website content launching in March 2013. Keep an eye out for photos and podcasts from the 3D[FWD] Event. If you wish to join the 3D Society or want to hear more about S3D community events & meetups in Canada, sign yourself up to our membership database and stay in touch.