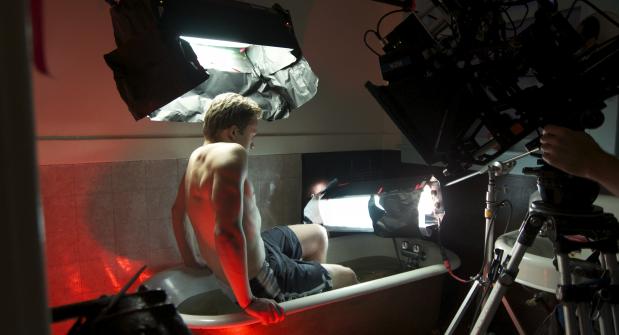 On a cold November evening, in the dark water of the Granville Island duck pond. A white boat floated effortlessly towards the camera. The scene was set and the cameras rolled on Emily Carr undergrad Jordan Dowler-Coltman’s short film “The Depths”.

View the behind the scenes video here: http://www.youtube.com/watch?v=i6BHuGj2l_4

The Depths is an underwater pas de deux shot in Stereoscopic 3D. The film examines the idea of two minds born of one understanding, suspended in a metaphoric body of water. Two energies are connected and interwoven then pulled apart, each then becoming lost and alone.This is represented by the two dancers/free divers filmed underwater moving as one connected body unfurling from a shroud, until the forces and currents of the water pull them apart setting them adrift. In the moment of separation, consciousness and self-awareness sets in and the new found individuals now must fight separately to reach the surface (of awareness). As each break through the water’s surface they awaken from an unconscious state, in separate worlds. Within the film we explore several levels of suspension – suspension between two states of being, suspension between life and death, and suspension of two bodies physically in space. And finally, the key visual language of the film, Stereoscopic 3D space, suspends the entire film using stereo depth.

On November 29th production began in Vancouver BC with a full day of shooting. First in a small bathroom with a clawfoot tub, the closest the actors would get to performing underwater until March. Then the evening was dedicated to a fog filled pond, and the opening of the film involveing a small row boat and a mythical boatman.

For this project the tools used included the center’s 3D Kerner Rig and Red Epics outfitted with ultra prime lenses. Although these tools had many upsides the main downside of the shoot was the nessacity to realigne following every lens change. Other then this slightly time consuming inconvenience the results achived with this setup couldn’t have been better.

This was only part one of the production, “the dry half” (Although camera Op David Tenniswood who was hip deep in ice cold water might disagree.) Filming underwater took place in March, and would need a custom built 3D underwater housing.