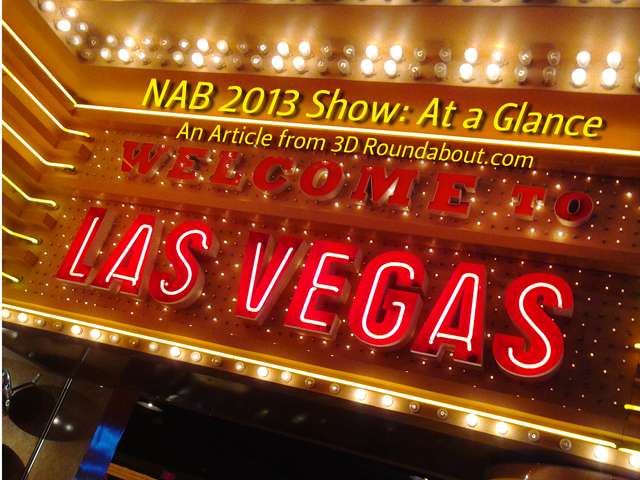 By Sean Arden, Emily Carr University of Art and Design

This was my first opportunity attending the NAB Show. But before the show officially opened I was able to be a part of the Technology Summit on Cinema with my colleague Alan Goldman, an Adjunct Researcher and Industry Liaison at Emily Carr. This article is an amalgamation of both of our notes.

All the panels were interesting, but these highlights discuss the issues relevant to stereoscopic production: The first day started with a talk by Eric Fossum, the inventor of the CMOS chip who described what cameras will look like in the future using the QIS (Quanta Image Sensor). I won’t go into the technical details, but if you would like more information please read this document, which is very similar to what Fossum presented on the panel. Fossum explains that the research is currently in the ‘counting phase’ and part of this includes counting the amount of data generated by the QIS and how to process it. To quote Fossum: “A fun challenge to consider [is] getting 5+ Tb/s data rate off chip”.

Following that panel, Michael Karagosian gave an Update on the Digital Cinema Worldwide Rollout. The relevant highlights were that 89,000 screens are now digital, converted from film. It breaks down as 70,000 are 2K and 19,000 are 4K – 50% of those are 3D.

Another interesting panel Distributed Post Production for Cinema: Technologies, Issues and Business Opportunities discussed the post-production pipeline and various models and the use of fiber network technologies to work offsite from a main studio. Jim Whittlesey showed a diagram that described the standard amount of data captured in a day on average from a regular 1080 HD production all the way through to a stereo 8K Higher Frame Rate production. This graph compared the amount of data storage necessary to facilitate productions as frame rate, stereo and resolutions grow. The buzz word of the morning was ‘data’ – lots of it.

The final speaker of the day on the subject of 3D was Barry Sandrew who went into great detail regarding the what he called The Good, the Bad, and the Ugly of 3D Films: An Essential Guide to the Advantages and Pitfalls of Conversion. Barry’s talk and the images that he showed were impressive and I learned a lot about what to look for when analyzing 2D to 3D conversion. Sandrew also talked of stereo blindness and the issues around ophthalmology and its effect on people’s ability to see with stereo-vision. Apparently a state of mono-vision is most often induced as a corrective measure for non 20/20 vision, enabling one eye to see close object and the other to be dominant for far objects. This phenomenon reduces the ability to see stereo depth resulting in a less compelling experience of 3D. This topic has spurred me to have my eyes checked to test my stereo vision.

Day 2 of the summit started with an on screen appearance of James Cameron during his tutorial on Higher Frame Rates. Following this, David Cohen directed a discussion with Jon Landau. Cohen pressed Landau for details on the new Avatar but Landau was very coy. The most interesting comment by Landau was that if you are going to make a film in 3D then you must shoot it natively and this was met with a muted round of applause (the only rise out of an otherwise silent crowd). Landau went on to say that in Russia and China theatres are only being built in 3D. Viewers there are growing up with the medium and unlike North American audiences they don’t compare 2D to 3D, and of course they expect that everything will be released in 3D.

There were two back to back panels on Higher Cinema Frame Rates. The first two panelists discussed HFR and the effects on the brain. Bert Dunk from the SIRT Centre (Screen Industries Research and Training Centre) in Toronto showed some HFR testing they shot last summer. According to Mr. Dunk’s opinion, 60fps at 358 deg shutter angle looks best. The second panel was mainly focused on the implementation of HFR projectors and the current successes since the release of the Hobbit in 48fps HFR. According to Drew Kaza, the Executive Vice President of Digital Development for Odeon/UCI Theatres said that they are committed to HFR.

The show floor was overwhelming. According to many of the industry veterans I spoke to, there was a significant lack of stereo vendors at the show. The 3Droundabout 3D @ NAB 2013 Spotlight page covered most of what I saw on the floor, but there were a few things that stood out for me that I really was impressed with.

The first was the in the Bavarian section where I found a company named Screen Plane. The Screen Plane rigs are compact, sturdy and very light. Their steady flex rig on display with two Alexa M’s was particularly impressive. The rig boasted a 100mm IA. Both cameras move against each other so the Steadicam does not lose its balance. The rig also has a custom integrated C-Motion controller. This rig has been around for a while but seeing it in action convinced me of its usefulness and versatility. Also at the Screen Plane booth was a demo shot with their Ultra Macro 3d Camera: Um-3d. This was a pretty stunning example of macro 3D. The bugs and clock works were truly crisp and amazing.

Another reason for going to NAB was to explore emerging technologies in multi-view. I visited the Fraunhofer booth and they had a multi camera array on display and a custom Adobe After Effects plug-in for converting stereo material into multi-view material. They showed an early auto stereo multi-view screen.

At the Dolby booth they demonstrated their autostereo screen. James Cameron made another on screen appearance with a ringing endorsement about the future of 3D. The screen was front and centre in their booth and Dolby had invited the lead research engineer at the Foundry to discuss format for delivery of multi-view and how it will be incorporated into the latest version of Ocula. After visiting the Foundry booth it became clear to me that 3D to multi-view conversion and the multi-view format that Dolby is developing will be a major consideration for post workflows in the future as autostereo screens become a reality.

My conclusions regarding the absence of 3D on the NAB trade show floor are that things are not grim – just quiet. No one has forgotten 3D, nor is it dead. 3D is not going anywhere and a lot of the talk regarding 3D was not on the gear side, but on the post-production side. Stereo tools are becoming common-place in the newest versions of software. Ultimately, the increased adoption of 3D depends in large part on the number of 3D screens in the home. As 3D practitioners it is our responsibility to make quality, enjoyable 3D as an ever-increasing number of people adopt and embrace stereoscopic media as the norm.

Sean Arden is a Stereoscopic Research Technician at the Emily Carr University of Art and Design in Vancouver, Canada. Emily Carr’s Stereographic 3D Centre is a national centre of excellence dedicated to advancing the art of stereoscopic 3D through research, education and training.