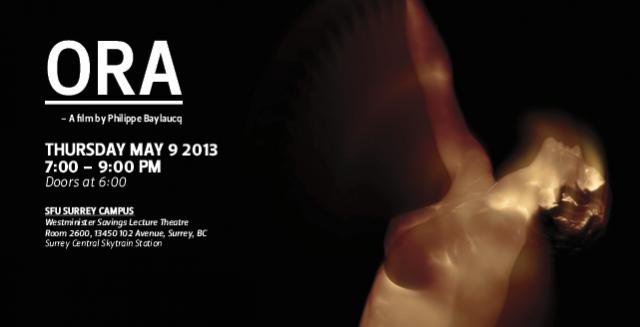 Please join us in an event presented by Simon Fraser University in conjunction with S3D Centre at Emily Carr, with support from the Canada Chapter of the 3D Society in an evening with celebrated filmmaker Philippe Baylaucq. This is an opportunity to see his award winning experimental Stereoscopic 3D short film “Ora” for the first time in Vancouver. Baylaucq will talk about the process of making the film, from using infrared thermal imaging cameras to working with performers in darkness – the only light source being the internal heat of the human body.

In addition to the screening of “Ora”, Baylaucq will show behind the scenes video, scenes from other works, and answer audience questions. “Ora” recently was the winner of the Autodesk 3D Independent Short Film Competition at the 3D Creative Arts Awards hosted by the International 3D Soicety.

This event is free and open to the general public. Register here for you free tickets.

—
About the film:
A cell divides itself. From this first mass of light six luminous bodies soon emerge. They evolve in a world they are discovering—explorers lit by their internal light, leaving behind traces of the fire that animates them.

ORA is a stunning meeting of the artistic worlds of choreographer José Navas and filmmaker Philippe Baylaucq. It is the first film to use 3D thermal imaging, producing visuals unlike anything ever seen: the luminous variations of body heat seen on skin, bodies emitting a multitude of colours, a space filled with movement that transforms itself.

ORA is dance transformed by cinema—a completely unique film experience. Director Philippe Baylaucq brings us a spectacular cinematic adventure, in the great tradition of innovative films produced by the National Film Board of Canada.

On the technology of thermal imaging in S3D: The use of these cameras is strictly controlled, and is limited to military, medical and scientific applications. This is the first time they’ve been used to shoot a complete film. The cameras were placed side-by-side and synchronized, like human eyes, which of course, enable us to see in three dimensions. As a result, the cameras allow us to perceive the surprising reality of the thermal world in stereoscopy.

Through the considerable efforts of a team of computer graphics specialists, we were then able to transform this visual thermal material into an innovative film experience.

About the director:
Philippe Baylaucq was born in Kingston, Ontario in 1958, studied in London, and first came to prominence during the 1980s for his work in videography and in cinema. His films are characterized by frequent experimentation with form, an affinity for technological innovation and an interest in various artistic disciplines. These include architecture (Barcelone, 1985; Phyllis Lambert, une biographie, 1994), painting (Mystère B, 1997; Les couleurs du sang, 2000) and dance (Les choses dernières, 1994; Lodela,1996;ORA, 2011). His films have won numerous awards at Montreal’s International Festival of Films on Art, as well as at many international film festivals.

The multi-talented Baylaucq has also directed a children’s musical tale starring puppets (Hugo et le dragon, 2001), a science film (La dynamique du cerveau, 2008) and A Dream for Kabul (2008)—a moving documentary about a man who travels to Kabul to assist ordinary people, after losing his own son in the attacks of September 11, 2001. Baylaucq was also the director in charge of Happiness Bound (2007), a homage to Quebec poetry.