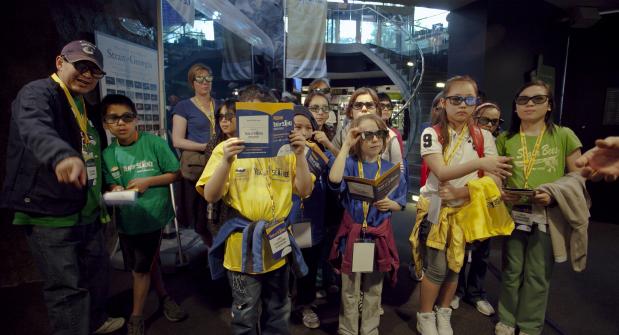 In May 2011, Emily Carr S3D team members Alan Goldman and Sean Arden participated in the Science and the Arts Expo held at Victoria’s Royal British Columbia Museum. They provided an overview of the S3D process, gave demonstrations and screened content created at the S3D Centre. Goldman pointed out that kids see a lot of 3D movies, but may not be aware that the process of making live action stereoscopic movies differs ever so slightly than 2D. “Their faces really lit up when they saw that big mirror rig and themselves in 3D,” he said.

The S3D Team was a huge hit with the 5,000 attendees. So much so that, in June, the team was invited back to the Year of Science Grand Finale at the Vancouver Aquarium.

“The Year of Science expos aimed to show students – in an exciting and engaging way – the latest and greatest technologies and science-based careers in British Columbia,” said Jane Burnes, Assistant Deputy Minister responsible for the Year of Science. “Emily Carr University’s 3D stereoscopic exhibit added immeasurably to our events, as thousands of students entered the world of 3D while learning from the university’s inspiring team.”

Sean Arden, who led the Finale demo enthused, “Teaching kids about 3D was a really interesting experience; they were so engaged, but (they) didn’t really understand what they were seeing. I discovered that the best way for them to understand how 3D works was to teach them how their eyes work, and that was really fun.”

By showing the science connection to the arts in fields such as digital media, design and special effects, music, and more, the expos demonstrate how science and technology impact our everyday lives and the communities we live in, and provide students and others the opportunity to meet the real people behind the science.

As Dr. Moira Stilwell, Parliamentary Secretary for Industry, Research and Innovation to the Minister of Jobs, Tourism and Innovation, has stated, “With the support of science leaders, as well as educators and community organizations throughout BC, our government is promoting increased literacy in science so we will be well-positioned to meet future workforce demands. Projections show that in the next 10 years one in eight jobs will be in science-related occupations, so it’s essential to get young people interested in science.”