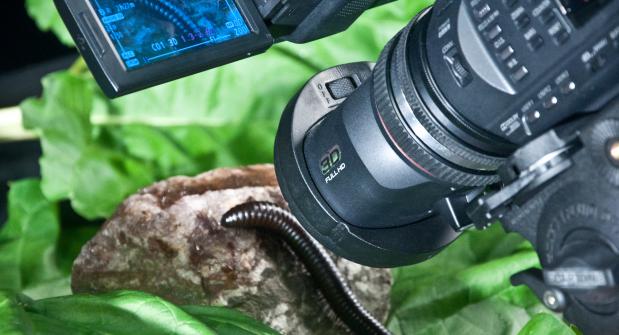 This summer we at the S3D Centre were provided with a unique opportunity to do a macro shoot in 3D. Andrea Frederickson from the Fredrickson Film Factory approached my colleague Denise Quesnel at 3D [FWD] in January. Andrea told Denise that she was inspired by the Conference and that she wanted to consider 3D as a medium for future projects. One of those projects was about bugs for kids. But she was not sure how to get close-up in 3D, which can be a problem depending on your background and the inter-axial distance between the cameras. She mentioned her friend Gary Oliver from Cinemazoohttp://cinemazoo.com who could bring the bugs to us and we told her about a camera and lens combination that we wanted to experiment with. The camera was a Panasonic Z10000 with a close-up filter adapter from Cylopital 3D in Colorado http://www.cyclopital3d.com/PANASONIC-3D-ADAPTERS.html.

Additionally we used a set of four Vivitar Lens with a diopter of +1, +2, +4, and +10 that came with the Adapter. This is readily available Prosumer technology that is relatively affordable. The lens afforded us the opportunity to get quite close-up with the bugs and arachnids which is not always advisable with Tarantulas and Scorpions. Although we have not been able to fully stereo grade, colour correct and depth grade the images this blog serves as some of our preliminary observations about the shoot (that took place at Emily Carr over a period of 6hrs) and our experiences.

The following is a question and Answer session with Andrea Frederickson of the Frederickson Film Factory regarding the 3D bug shoot that took place at Emily Carr.

Question: Can you tell me what you were hoping to accomplish by shooting the bugs in 3D with macro lens?

Answer:  I have wanted to shoot insects in 3D Macro now for many years for a children’s science show called “Cute As a Bug.” I have developed the concept and hope to pitch it to the Networks as a 2D series with a 3D bonus. Distribution for 3D is still very limited but I’m really hoping to get on the bandwagon with this project. Insects seriously fascinate kids and this series is designed to educate and inform in a fun and exciting way. Capturing the physical beauty of the bugs in Macro 3D and being able to observe the mechanical detail that Macro 3D provides makes for a great learning experience. It’s truly awe inspiring to witness the utter elegance and strange beauty of the bugs so up close and personal. The 3D Macro component takes the viewer into a fantastic, secret world you can’t experience with the naked eye. Kids are going to be blown away.

Q: What made you consider the Panasonic Z1000 to capture these images?

A: Originally I had planned to shoot the test footage with two Red Cameras and a professional 3D rig. This of course is a more costly endeavor but fortuitously, through Denise Quesnel at the Emily Carr S3D Centre and the International 3D & Advanced Imaging Society headquarters at Emily Carr, we were able to seize the opportunity with the Panasonic Z1000.  As luck would have it Alan Goldman had some new macro lens he was interested in testing with his high end “Prosumer” 3D camera.  I inadvertently had the subject matter. It was a complimentary test that benefited 2 parties.

Q. Can you tell me about your relationship with Gary Oliver at Cinemazoo? How did you approach him regarding your idea?

A: I have been working with Gary Oliver for over 10 years. Originally he was the featured guest at my kids’ annual Halloween party the “Snake Hotel” where he would arrive with his amazing reptiles, insects and of course snakes. There would be over 40 enthralled kids packed into my living room every year. This triggered the idea for the series “Cute as a Bug.”  I have huge respect for his knowledge and we have become friends with a mutual love of the natural world. Unfortunately financing was always an issue. When the Emily Carr S3D Centre said they could help we jumped at the opportunity. Gary Oliver’s new operation in White Rock, “Urban Animal Safari Rescue” which is home to a multitude of exotic and endangered animals is another project we are hoping to develop some programming for. 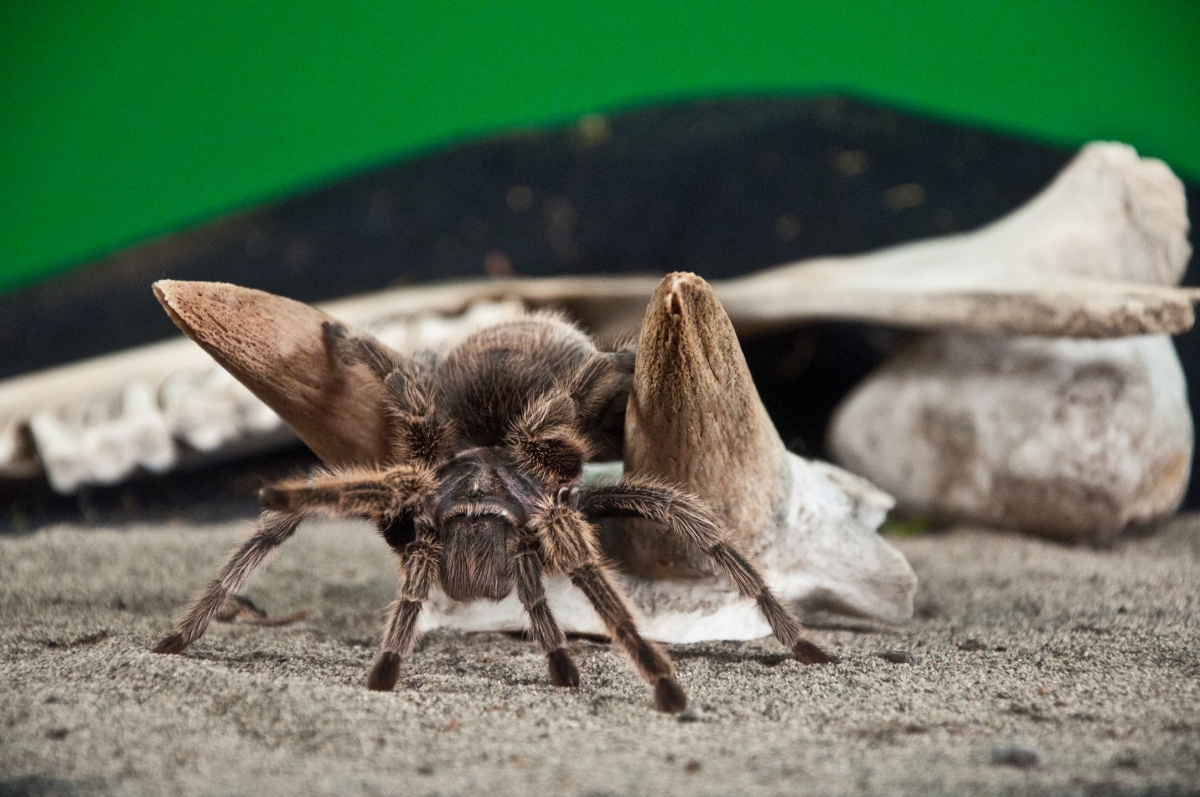 Q: Can you tell me about working with the S3D Centre? How did you learn about the Centre? To date what has been your experience of working with us?

A: I am really interested in 3D and was exploring 3D convergence with Gener8 for a slasher/comedy feature called “Whipperman” which I am also pitching.  Luckily they told me about the then upcoming 3D[FWD] event in Feb 2013 which I attended. This is where I hooked up with the Emily Carr S3D Centre contingent and realized that they are powerhouse with international affiliations. At any rate the event was fabulous.  I made tons of connections and most importantly started really learning about the technical reality of shooting 3D.  Finding the S3D centre was a big break for me because suddenly I was hooked up with local artists like myself passionate about 3D.  During the shoot at Emily Carr, I was really impressed with the technical professionalism that Patryk Stasieczek, Paolo Pennutti and the rest of the S3D Centre. We were finally able to get some great footage in the can with a financially realistic camera package. This helped the centre test the macro lenses and helped me get one step closer to making my series happen.

Q: What kind of discoveries did you make about the bugs/cameras while you were on set?

A: We discovered shooting insects in 3D was really very exciting as the bugs were quite delightful performers. Of course Gary Oliver’s expert “bug wrangling” abilities made this happen as he could anticipate the behavior of the various specimens and get them to explore the mini environments in a way that made it best for the camera. He really is an amazing guy. The challenges with the camera were trying to deal with maintaining the focus on the subject as opposed to the background elements. Eventually we simplified the sets for the best results and were able to focus more specifically on the most visually interesting details of the bugs. For example the millipede’s “revolving” leg the tarantula’s “complex facial features” and the “face to face” territory stand off of the two female Stick Insects. It was also cool to watch the Prickly Leaf Insects fake “blowing in the wind” their “undulating” camouflage technique as well as witnessing them laying eggs … in 3D!

Q: What is the next step for your project?

A: Now that I see the effectiveness of the Panasonic Z1000 I am going to see whether or not it is feasible to complete a 3 – 5 min sizzle reel, which conveys the complete concept for “Cute as a Bug.” Even though the Z1000 is considered a “prosumer” 3D camera package, I know that I can complete the sizzle more economically than with the Red cameras and pro 3D rig and it will still look great.  I will also master a 2D version of course for practical pitching and then “thump em” with the visual ‘wow’ factor of 3D.  Once the select rushes are stereo and depth graded I can look at what we’ve got and finalize the script for the sizzle. That challenge will include shooting the sync component of the hosts and then adding some razzle-dazzle 3D graphics.  Also the theme music has to be hot but kid friendly. My background is extensive post and I’m keen to figure it all out and cut a really great sizzle reel. I hope that I can continue my creative collaboration with the Emily Carr S3D Centre, as they are so eager to share knowledge. I work in the film industry and at the end of the day it’s a pretty tough business. I can’t express how refreshing it is to work with artists collaborating on making something beautiful for the sake of experimentation and knowledge. It was really because the S3D Centre stepped in that I was able to make this happen. 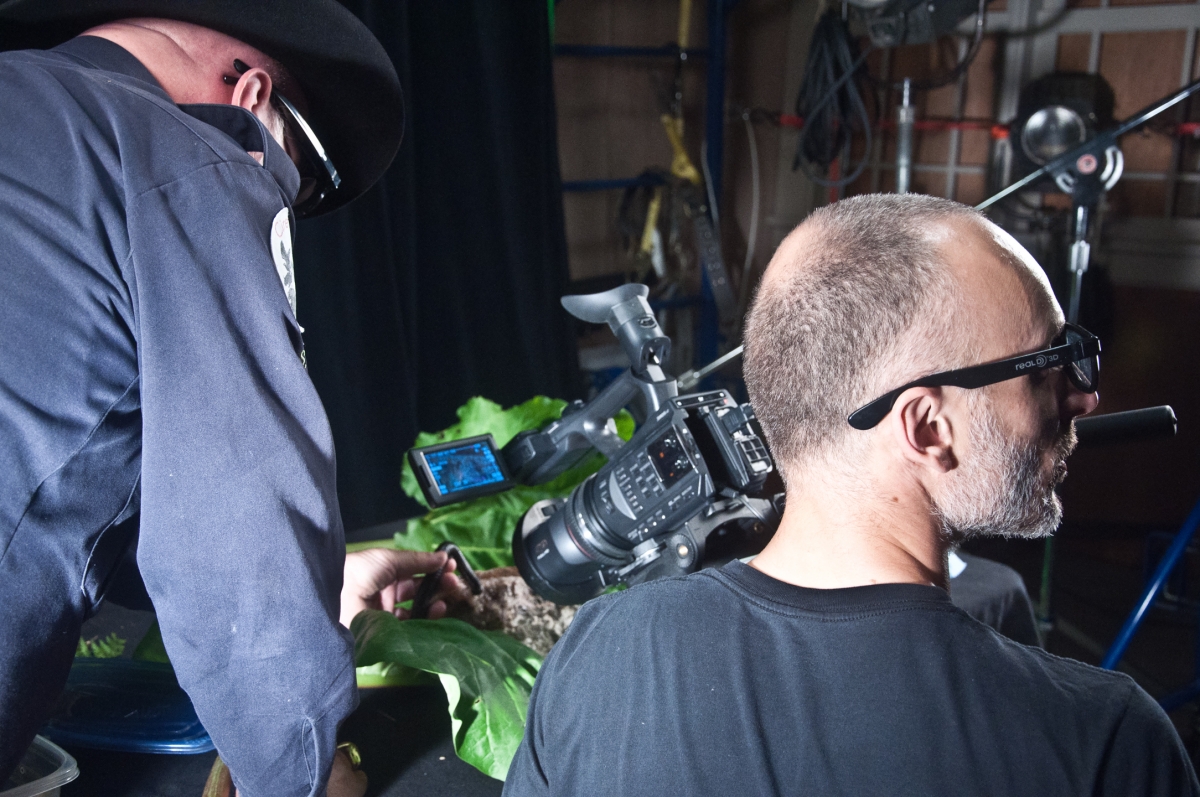 The following is a question and Answer session with Patryk Stasieczek, a Research Assistant and Masters Student at Emily Carr regarding the 3D bug shoot that took place at Emily Carr.

Q: How many hours/minutes of footage was there?

A: The total length of unedited in-camera footage is: 01:56:33 (22.0GB). Currently the footage separated left and right, and sequenced with workable 2D footage is 00:50:37. There was a lot of set-up footage, empty feed, and coercing of the set & insects that were cut out. This length will probably go down substantially once we are able to figure out what sequences work in stereo with the Vivitar lenses and which do not.

Q: Tell me about your evaluation of the footage. What was your process for deciding what images would possibly work in 3D? Did you initially screen the footage in 2D?

A: At this moment in the post production sequence, I was looking for footage that worked within a traditional two-dimensional space, going through the sequences and cutting out the behind the scenes takes, measurements, slates, set set-ups, insect placement, etc. Essentially if it looked good in 2D it was the first starting point. Now that the editing has been done, and the fat trimmed off, and each consecutive segment of the same insect/set-display was condensed into a long workable sequence. 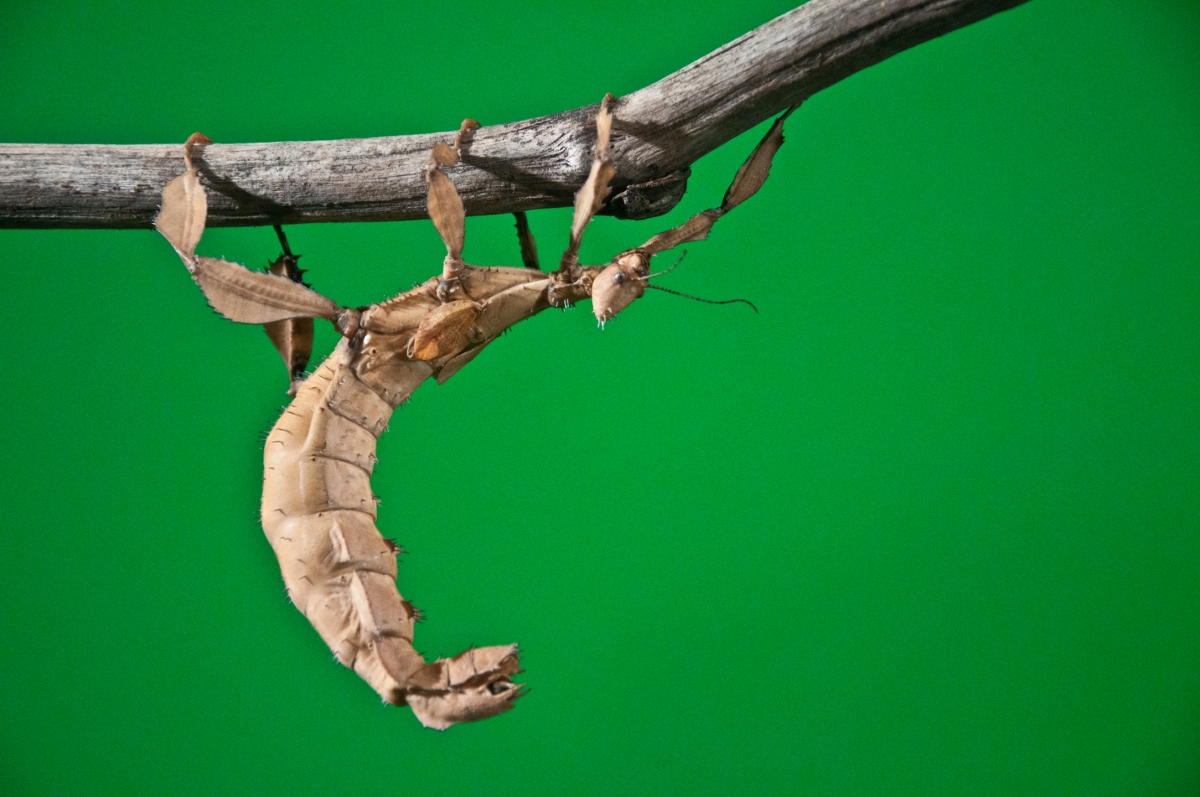 A: The macro lenses proved to be quite an issue while capturing, as they were not designed for stereoscopic prosumer cameras like the Panasonic Z10000 we used. We shot with +1 diopter, +2, +4, and +10 diopter Vivitar macro lenses. These lenses were designed for single sensor cameras and not stereoscopic prosumer devices. Because of the single-optic calibrated design, the best macro filter lenses were +1 diopter and +2 diopter, as distortion was minimal on these two filters. They both still did have slight image distortion around the outer-left (for the left-eye sensor) and outer right (for the right-eye sensor) of the footage, as they were not designed for a stereo camera system.

Q: Is there a specific lens to distance combination that you qualitatively think worked best?