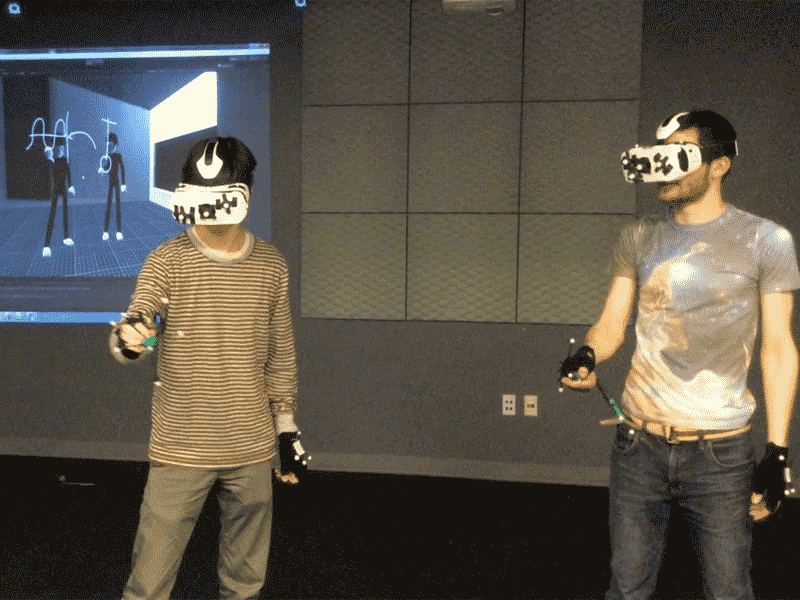 We are going to try and have Ken’s experience available, depending on the logistics of the day. If you are interested in trying it, we’ll keep you posted via these Eventbrite notifications so be sure to register! We will also be showing demonstrations of games, apps, and VR experiences created by members of our community. They are fantastic so make sure to come early and give them a try.

Prototyping the Future: The question our lab at NYU is asking is “How might people in the future communicate with each other in every day life, as computation and display technologies continue to develop, to the point where computer-mediated interfaces are so ubiquitous and intuitive as to be imperceptible?” To address this, we are doing sensor fusion between GearVR and OptiTrack technologies. Participants walk freely around and untethered by any wires, in physical space, interacting with other people and physical objects, just as they do in everyday life. Yet everything those participants see is computer-mediated, thereby allowing them to share any reality they wish, simulating the experience of future high resolution contact lenses.

Ken Perlin, a professor in the Department of Computer Science at New York University, directs the NYU Games For Learning Institute, and is a participating faculty member in the NYU Media and Games Network (MAGNET). He was also founding director of the Media Research Laboratory and director of the NYU Center for Advanced Technology. His research interests include graphics, animation, augmented and mixed reality, user interfaces, science education and multimedia. He received an Academy Award for Technical Achievement from the Academy of Motion Picture Arts and Sciences for his noise and turbulence procedural texturing techniques, which are widely used in feature films and television, as well as the 2008 ACM/SIGGRAPH Computer Graphics Achievement Award, the TrapCode award for achievement in computer graphics research, the NYC Mayor’s award for excellence in Science and Technology and the Sokol award for outstanding Science faculty at NYU, and a Presidential Young Investigator Award from the National Science Foundation. Dr. Perlin currently serves on the program committee of the AAAS. He was general chair of the UIST2010 conference, and has been a featured artist at the Whitney Museum of American Art.

Dr. Perlin received his Ph.D. in Computer Science from New York University, and a B.A. in theoretical mathematics from Harvard University. Before working at NYU he was Head of Software Development at R/GREENBERG Associates in New York, NY. Prior to that he was the System Architect for computer generated animation at Mathematical Applications Group, Inc. He serves on the Advisory Board for the Centre for Digital Media at GNWC, and has served on the Board of Directors of both the New York chapter of ACM/SIGGRAPH and the New York Software Industry Association.

ORGANIZED and PROMOTED BY