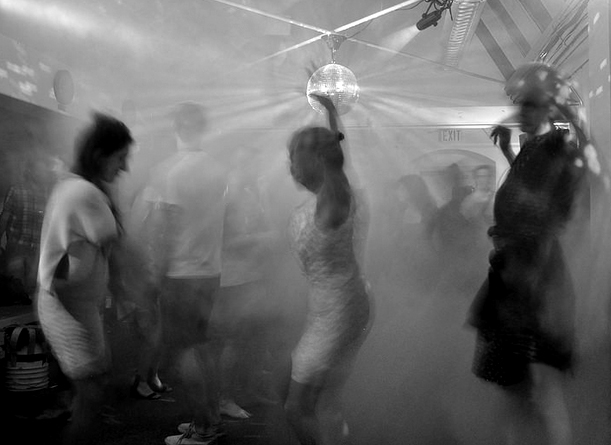 These events were the first in a larger project examining the lounge as a site for innovation, currently underway through Living Labs at Emily Carr. This series of iterative, hands-on investigations will creatively consider the social and spatial forms of the lounge and what they might mean for the future of work.

Instant Coffee’s Light Bar was first conceived as an ironic gesture to confront the sincere difficulties of living in such a rainy and grey climate as Vancouver, British Columbia. The research began in 2008 in Bergen Norway, a city with equally dark and rainy winters. It was initially presented as an experimental concept to explore light therapy as a social endeavour – collectively seeking well-being in a social and visual art environment. Almost immediately, Instant Coffee discovered the genuine effects of light therapy delivered within the context of social sculpture. The Light Bar has taken many forms, but always has at its centre a sculptural form that functions as a bar encapsulated by full spectrum lights. This sculpture becomes the pinnacle for a larger environment which is used as a venue to host cultural events from music to performances; from scientific lectures to artist talks; from art exhibitions to karaoke. Since its initial presentation, the Light Bar has taken many forms and has been brought to life in many places from Hoorn in The Netherlands to Victoria, BC. Upon learning that many parallel researches and studies were being conducted in the field of psychology and scientific communities, Instant Coffee was doubly emboldened.

Instant Coffee | Instant Coffee [IC] is a service oriented curatorial and artist collective based in Toronto, Winnipeg and Vancouver. IC’s frequent practice is to build venues or stages for organized events from formal lectures and screenings to informal gatherings and workshops. These artworks often require hosts who initiate some form of performative interaction. Instant Coffee has an extensive art practice, spanning near fifteen years. As an artist collective they have invested in combining the social with the aesthetic, and as such have worked in public spaces to engage large audiences. IC has had numerous solo exhibitions, including Take the Easy Way, MKG127, Toronto and The hero, the villain, the salesman, the parent, a side kick and a servant, Teck Gallery at Simon Fraser University, Vancouver. IC participated in a residency program at Incheon Art Platform, S. Korea and designed an installation for the Cheongju International Craft Biennale. They will launch a publication with Western Front, Vancouver relating to their exhibition Feeling So Much Yet Doing So Little. IC recently launched ‘Colours,’ a public artwork at Station SQ. in Burnaby BC. As part of the City of Vancouver’s 2010 Cultural Olympic programme, IC opened Light Bar, a full-spectrum light bar installation and venue. In 2009 IC exhibited the ‘Disco Fallout Shelter’ at the Toronto Sculpture Garden, and as part of Subvision, Hamburg; ‘Nooks’ as part of How Soon is Now, Vancouver Art Gallery; ‘Light Bar’ as part of Assume Nothing, New Social Practice, Art Gallery of Greater Victoria. Other select residencies and exhibitions include Sølyst, Denmark, Kuenstlerhaeuser Worpswede, Germany; Flaggfabrikken/Bergen Kunsthall, Bergen, Norway; School of Non-Productive Learning, Aarhus, Denmark; Mercer Union, Toronto; Henry Art Gallery, Seattle; Casa del Encuentro MDE07 encuentro internacional, Medellin, Colombia; the Yerba Buena Centre, San Francisco and the America’s Society, New York.

ISEA  | The International Symposium on Electronic Art is one of the world’s most prominent international arts and technology events, bringing together scholarly, artistic, and scientific domains in an interdisciplinary discussion and showcase of creative productions applying new technologies in art, interactivity, and electronic and digital media. The event annually brings together artists, designers, academics, technologists, scientists, and general audience in the thousands. The symposium consists of a peer reviewed conference, a series of exhibitions, and various partner events—from large scale interactive artwork in public space to cutting edge electronic music performance. In the last four years ISEA has been hosted in Istanbul (2011), Albuquerque, New Mexico (2012), and Sydney, Australia (2013), and Dubai (2014). ISEA2015 in Vancouver marks its return to Canada, 20 years since the groundbreaking first Canadian ISEA1995 in Montréal. The Symposium will be held at the Woodward’s campus of Simon Fraser University in downtown Vancouver with exhibitions and events taking place at Emily Carr University of Art + Design and many other sites and venues throughout the city.

The series of ISEA symposia is coordinated by ISEA International. Founded in the Netherlands in 1990, ISEA International (formerly Inter-Society for the Electronic Arts) is an international non-profit organization fostering interdisciplinary academic discourse and exchange among culturally diverse organizations and individuals working with art, science and technology. ISEA International Headquarters is supported by the University of Brighton (UK).

Wantoo | It all begins with an idea. Before you build it, test it. Validate your inspiration instantly. Whatever you’re building –  a new product, app, company, recipe, wearable, jetpack, you name it – wantoo is the fastest way to test your idea.