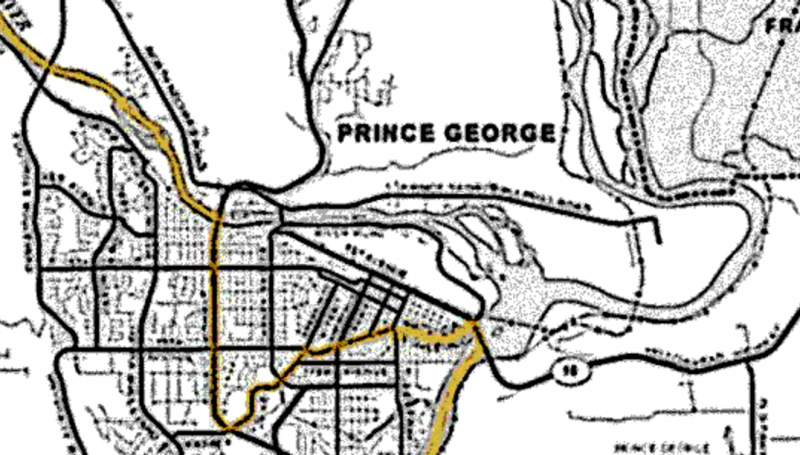 The Omineca Arts Centre is a new art space in Prince George that will enhance regional capacity for arts and culture through events, exhibitions, residencies, workshops, educational programming, and research. This project was initiated by an emerging group of artists, curators, and community organizers based in Prince George in collaboration with Emily Carr University of Art + Design and Two Rivers Gallery.

The Omineca Arts Centre occupies a storefront on unceded Lheidli T’enneh Territory in Prince George. It is the former site of the Neighbourhood Time Exchange | Downtown Prince George, which hosted a series of 9 community-driven artist-in-residence projects developed by Emily Carr University in 2016-2017.

“This project space has catalyzed new energy from the Prince George community, and we feel incredibly proud to be part of this new chapter,” said Kate Armstrong, Director of Living Labs at Emily Carr University.

“With Emily Carr and Two Rivers Gallery’s support, Omineca will give us the capacity to be culturally responsive to the unique needs of our region; and to engage in collaborative, inclusive and accessible programming and innovative projects,” said Roanne Whitticase, co-founder of Omineca Arts.

The inaugural exhibition at the Omineca Arts Centre, located at 1119 3rd Avenue Prince George, will open at 7:00 pm on Friday, May 12 and is open to the public.

Find out more at ominecaartscentre.com

Two Rivers Gallery is a vital centre for visual art in Prince George and the central interior of British Columbia, Canada. Our mandate is to engage and inspire people through interaction with art by presenting compelling exhibitions and stimulating programs that improve the quality of life and cultural well being of our communities. Our mission is to encourage lifelong learning through the arts; create an environment for vigorous artistic and cultural expression; and provide opportunities for diverse experiences through participation and exhibition.

Omineca Arts Centre Founders:
DANIEL BELL is a Prince George-based musician, music teacher and arts promoter.  Since 2015 he has been working to bring music from outside Prince George to the community and helping to create spaces for local artists to showcase their work.

DR. ROB BUDDE has taught creative writing at the University of Northern British Columbia since 2001. He has published eight books (poetry, novels, interviews, and short fiction) and appeared in numerous literary magazines. His most recent books are declining america and Dreamland Theatre.

ADAM HARASIMIUK studied at the Randolph Academy for the Performing Arts and is a major contributor to the growth and advancement of the theatre and performance arts community in Prince George. He is currently completing his Master of Arts in English at the University of Northern British Columbia.

MEGHAN HUNTER-GAUTHIER is an emerging curator whose work is concerned with exploring the relationships between rural and urban spaces, as well as how humans perceive and value the natural environment. She has a BFA in Criticism & Curatorial Practice from OCAD University and a Postgraduate Certificate in Arts Administration & Cultural Management from Humber College. Currently, Hunter-Gauthier is Acting Assistant Curator with Two Rivers Gallery in Prince George, BC.

JENNIFER PIGHIN is a professional artist and art educator in Prince George, BC. She is a proud member of the Lheidli T’enneh First Nation with Wet’suwet’un, French Canadian, and Italian ancestry. Jennifer holds a BA in Visual Arts from Emily Carr, a Bachelor of Education – Specialisation in Art from the University of British Columbia and a Masters in First Nations Studies from the University of Northern British Columbia. Rooted within the community her artwork is often collaborative in nature using a wide range of media including painting, drawing, digital design, mosaic, traditional arts, public installations and much more. Her work was showcased in the Canada Pavilion at the 2008 Beijing Olympics and within many aspects of the 2015 Canada Winter Games.

ROANNE WHITTICASE is an artist and community organizer based in Prince George, B.C. She holds a Bachelor of Health Sciences in Community Population Health and is the MakerLab Coordinator at Two Rivers Gallery. In 2016-17, she was Project Coordinator of the Neighbourhood Time Exchange | Downtown Prince George, through which she hosted nine artists in residence. Her practice includes mixed media, assemblage and digital design.