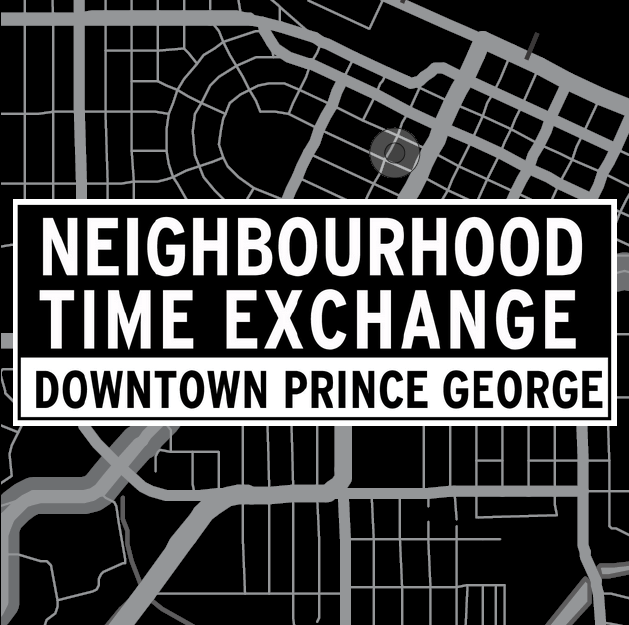 The Neighbourhood Time Exchange | Downtown Prince George is an artist residency project that operates on a simple principle: for every hour an artist spends in their studio, they provide an hour of volunteer service to the community. This creative placemaking initiative aims to explore the concept of time banking, in which artists and community members work together as a means for social, civic, and economic revitalization. Participating organizations provide ideas, expertise on the needs of the city, and a context for the artist. Artists provide their visions, their unique perspectives, and their specialized skills.

Through the project, nine local and visiting artists will be working with a variety of Prince George organizations including Downtown Prince George, the Prince George Public Library, the Prince George Community Foundation, Innovation Central Society, and the Recycling and the Environmental Action Planning Society (REAPS) in order to realize a number of community projects that contribute to the creative and economic well-being of Prince George’s downtown. Artists in Residence include Rachel and Sarah Seburn, Lily Mead Martin, Alana Bartol, David Jacob Harder, Eric Moschopedia, Mia Rushton, Michelle Fu and Frances Gobbi.

Justin Langlois, Curator, is an artist, educator, and organizer. He is the co-founder and research director of Broken City Lab, an artist-led collective working to explore the complexities of locality, infrastructures, and participation in relation to civic engagement and social change, and he is the founder of The School for Eventual Vacancy. His practice explores collaborative structures, critical pedagogy, and custodial frameworks as tools for gathering, learning, and making. He is currently an Assistant Professor of Social Practice in the Faculty of Culture + Community and Academic Coordinator of the Imagining Our Future initiative at Emily Carr University of Art and Design. He lives and works in Vancouver, Canada.

Caitlin Chaisson, Curatorial Assistant, is an artist and writer based in Vancouver, BC. She received a Master’s of Applied Arts at Emily Carr University of Art and Design in 2016, and holds a BComm with a Minor in Art History from the University of British Columbia. She has exhibited at the Charles H. Scott Gallery (2016), Hyphenated Sites (2016) and Ground Gallery (2015). Her writing has been published in Espace Magazine (Montréal), Breach Magazine (Vancouver), and Decoy Magazine (Vancouver).

Roanne Whitticase, Project Coordinator, is an artist based out of Prince George, B.C. She holds a Bachelor of Health Sciences in Community Population Health and is the MakerLab Coordinator of Two Rivers Gallery. She has exhibited at Tangled (2016) with an upcoming exhibit at Two Rivers Gallery in late 2016. Her practice includes mixed media, assemblage and digital design.

Artists in Residence
Rachel and Sarah Seburn are from Edmonton, AB. They each hold a BFA from Emily Carr University and the duo currently works out of Sunset Terrace in Vancouver. Collaboratively they have exhibited throughout British Columbia, Yukon, Manitoba and Alberta. In 2015 the artists founded the real-estate firm: Temporary Investments. Their work has been reviewed by Satellite Gallery, The Vancouver Sun, Van Document, and Bartleby Review.

Lily Mead Martin is an interdisciplinary artist based in Vancouver, BC. Martin studies the relationship between architectural transience and contemporary nomadism through the production of drawings, site-specific installation and performance. Martin received her BFA from the Nova Scotia College of Art and Design (’10) and completed a Master of Applied Arts from Emily Carr University of Art + Design (’16). She is the recent recipient of a Graduate Research Award from ECUAD, a British Columbia Arts Council Scholarship Award, and a PRIM Production Grant (Montréal) | lilymeadmartin.com

Alana Bartol is an artist and educator from Windsor, ON. Through performance, video, drawing, installation, and community-engaged art, her work aims to make visible the invisible forces, bodies, and histories in our everyday environments. She currently resides in Calgary and teaches at Alberta College of Art + Design. | alanabartol.com

David Jacob Harder is an interdisciplinary visual artists/curator from Wells, British Columbia. His work focuses primarily on a heightened awareness of the raw nature and the malleability of landscape. With a first hand interaction with natural materials and the amalgamation of industrialized and organic materials he attempts to further understand our relationship to the fundamentals of time and decay. Harder’s work has been exhibited widely across Western Canada and parts of Europe and can be found speckled throughout the mountain trails and areas where he has lived. | davidjacobharder

Eric Moschopedis and Mia Rushton are award-winning interdisciplinary visual artists, facilitators, and community organizers. By combining the playfulness of childhood chums with the scrutiny of ethnographers, we create community-specific, relational, and participatory works that invite audiences to become active agents in the creation of community. | ericandmia.ca

Michelle Fu is an artist based in Vancouver, Canada. She is the co-founder of 221A, an artist-run organization that develops public infrastructure from social, critical or philosophical perspectives on designed media and space. Her artworks have included sculpture, installation, drawing and social practice. She holds a Bachelor of Design. 221a.ca

Frances Gobbi is an artist, mother and teacher living in Prince George, British Columbia.  Notions regarding childhood play, religion & nature often have a strong influence on her work. These days she is working mostly in photography and painting with watercolours, but she sometimes explores other mediums.