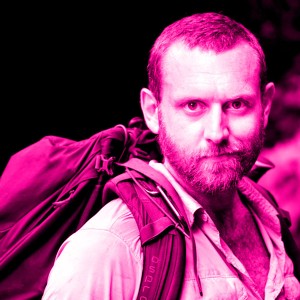 Andrew Quitmeyer graduated with a PhD in 2015 from the Georgia Tech School of Literature, Media, and Communication and had Dr. Garnet Hertz as external thesis advisor.

Dr. Andrew Quitmeyer is a digital adventurer studying intersections between wild animals and computational devices. He’s a professor at the National University of Singapore researching how to blend biological fieldwork and DIY digital crafting. This “Digital Naturalism” work has taken him through the wilds of places such as Panama, Madagascar, Philippines, and the Galapagos where he runs workshops with diverse groups of scientists, artists, designers, and engineers. He currently leads “Hiking Hacks” around the world where participants build technology entirely in the wild for interacting with nature. His research also inspired a spinoff television series he hosted for Discovery Networks called “Hacking the Wild.”

He is the winner of several design awards and his trans-disciplinary, multimedia projects have been featured in The Discovery Channel, Wired, PBS, NPR, Cartoon Network, Make Magazine, Fast Company, Gizmodo, along with other print and digital internet news and educational sources.