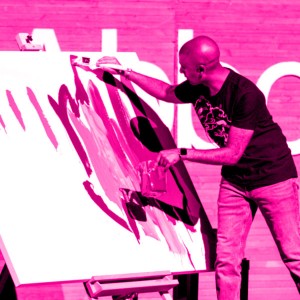 I was born Scott T. Mallory, Jr. (known to most as “Trent”) in Washington, D.C. and first found interest in visual arts and creative writing. I learned to play congas around age 8, mostly influenced by Go-Go music (a percussive syncopated genre originated by Chuck Brown in D.C.). The congas were homemade, and held up by furniture and stacks of books. As that developed, I had the chance to spend time backstage on tour with reggae luminaries, and producer Philip “Fatis” Burrell bought me a set of LP congas, soon inviting me to perform with them, although I couldn’t ditch enough 5th grade classes to pursue that much further.

I continued playing with Go-Go bands through high school, and was persuaded to get a piano which opened another vast creative dimension as I started learning on my own. While pursuing a BFA in the Studio Art Honors Program at University of Maryland, College Park (USA), I built a sound studio in 2006, picked up more instruments, and started recording various types of music as more of a ‘one man band’ and added rapping to the toolset. Some of my influences were Miles Davis, Led Zeppelin, Pink Floyd, Jimi Hendrix, Autechre, Portishead, Radiohead and Mos Def.

As my artwork evolved from drawing/painting to video art, I used my musical and technical experience to create accompanying sound art, and became a time-based artist. At this time I began incorporating performance and writing. After graduating in 2008, I continued with video to study film at London Film Academy (UK) and Prague Film School (Czech Republic) and then 3D Animation & Visual Effects for Film at Vancouver Institute of Media Arts (Canada). Filmmaking has become my favored medium to combine everything.

Since 2010, I have worked in visual effects including at Side Effects Software Inc (Toronto), done sound engineering and video work, taught English as a foreign language at private language institutions, and taught music, art, Spanish and algebra at charter and public schools. I also find teaching to be an engaging art in itself.

I teach media arts at Emily Carr University of Art + Design (Vancouver, Canada), where I completed an MFA and founded TEDxECUAD. I continue to be involved with TED and TEDx while teaching and pursuing personal work and collaborations. My recent work incorporates virtual reality and collaborations across art and physics.