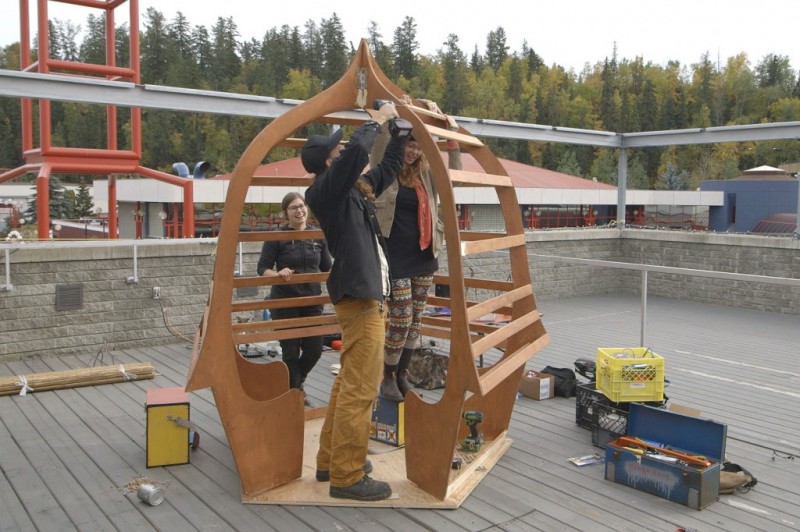 Material Matters at Emily Carr University of Art + Design and Two Rivers Gallery will co-host the 2019 edition of the New Craft Symposium on March 9, 2019. The symposium is the fruition of Living Labs-supported partnership development between Material Matters and Two Rivers Gallery that investigates industry relationships in the space around material research and community-driven artistic programming. Emily Carr University develops research and industry partnerships in Prince George with a variety of partners in association with the Wood Innovation Design Centre (WIDC).

Throughout 2018-2019, the Material Matters research team has been collaborating with Two Rivers Gallery to build on and augment the Gallery’s existing programming through the lens of Maker Culture. In addition to New Craft Symposium, the collaboration also produced 3 artist residencies to coincide with key events at Two Rivers Gallery.

A research creation practice developed by the faculty and affiliated researchers of Material Matters, New Craft starts at the intersection of new workflows of digital manufacturing with traditional material processes such as ceramics, glass, textiles, and woodworking. This expanded field calls for a wider and deeper knowledge of legacy material production techniques (craft) as well as the appropriation of new digital material production technologies (new craft).

Makers and DIYers combine material production techniques and the internet’s freely available library of things. As new material ecologies extending from the material process produce outcomes, Material Matters team explores the outcomes and facilitates the information sharing by organizing social + make forums and events that enable making to know together. This New Craft is a research creation practice of ideation, development, and assembly that is done collaboratively.

Born out of this investigation, New Craft Symposium at Two Rivers Gallery will create an environment of sharing that is focused on Art, Design + Craft processes and practices. The symposium will include presentations and workshops. Following an introductory talk on New Craft given by Keith Doyle and Emily Smith, artists Benny Zenga, Logan Mohr, Kate Metten and Kim Werker will present their work as it relates to New Craft. The symposium will conclude with workshops given by Justin Miles and Kim Werker.

By integrating artists with mixed material practices into an established gallery programming, the partnership provides different modes of public engagement within a residency framework.

The first residency took place in July 2018 during the Gallery’s annual BMO KidzArt Dayz festival, which welcomed over 12,000 visitors. Participants were invited to collaborate on an artwork with Regina-based interdisciplinary artist Terri Fidelak, whose place-based practice investigates the meanings produced by the convergence points of objects, people, and environments. For her work in Prince George, Fidelak was inspired to examine the very act of art production as a way to build community. The participants were asked to create clay sculptures of flora, fauna, fungi and animals that they might see in their own gardens. As the garden grew, it took a life of its own with the collaborators responding to, and interacting with, the existing sculptures. At the end of the festival, the installation Ephemeral Garden was born. Temporary in its nature, the installation was on display at Two Rivers Gallery for only two weeks, after which the clay was recycled for reuse by Prince George Potter’s Guild. 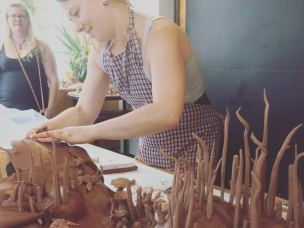 The second artist to complete residency was Benny Zenga of Zenga Brothers and coincided with Prince George Mini Maker Faire held on September 22, 2018. The brothers aim to bring creativity to the our day-to-day lives in unconventional ways, especially with their High Up Huts. Using forgotten materials such as posts, pillars, fallen branches, and installed in unconventional spaces, the huts exist in an intermediary space between a sculpture and a living hut, providing a refuge for contemplation for those who can access them. As part of his residency, Zenga was commissioned by Two Rivers Gallery to create a hut for the Sculpture Court. The residency also had Zenga interacting with the Prince George community in a multitude of events, including the Maker Faire as well as a Pro-D day held at the Gallery, in which he built mini huts with the grade students in attendance. 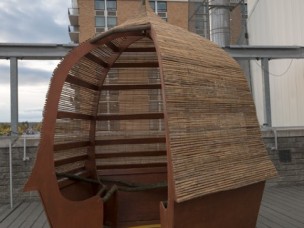 The final residency will feature Justin Miles, whose background in animation informs his current practice as an automata artist. Mixing the traditional Japanese Karakuri Ningyo method with Arduino, an open-sourced hardware and software tool to make interactive objects, Miles creates kinetic sculptures that interact with their environments. As part of the residency, Miles will conduct workshops and participate in the New Craft Symposium. 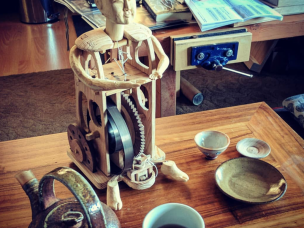