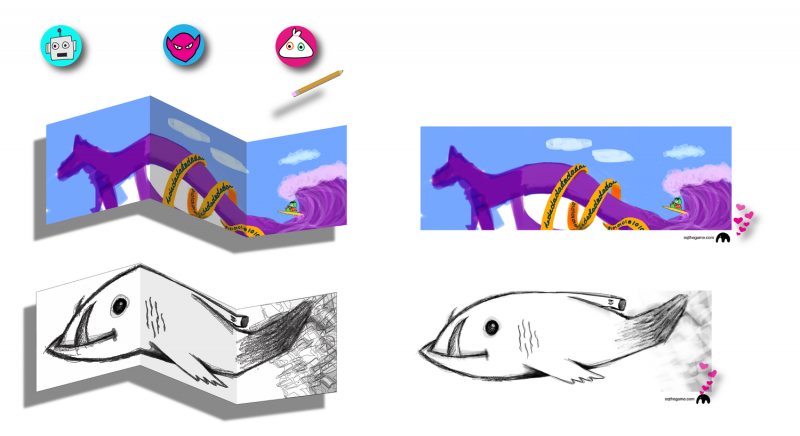 AS AN entrepreneur, visual artist, and cofounder of Vancouver’s Mobil Art School, Mohamed Somani says creating art is synonymous with building connections. He believes there is a social aspect to creativity that should be accessible to all, whether through professionally run exhibitions, art history classes, or even just doodling in the margins of a notebook.

Now, in the pandemic era, Somani and his team at Mobil have found a way to bring this philosophy to the virtual sphere with their new art and social app, EQ The Game.

This idea of connection through art is the very notion that led him, along with Sean Alward, Evan Lee, and Fiona Chan, to establish Mobil Art School in 2018.

The school was founded initially with a fully mobile concept. Somani and his cofounders would bring their extensive expertise in art fields to retirement homes, often hiring local artists to engage in their community as well.

“We wanted to reach communities that are not normally reached in this kind of way and give them quality classes where we don’t water things down,” Somani says. “We’d talk about the things we’re passionate about, the paintings we love, the things we’ve grown up with, and we found that the people we were teaching had all engaged in art at some point of their lives. They loved it!”

Such positive reception led Somani and his cofounders to establish a physical school in Vancouver’s Chinatown only six months later. People of all artistic backgrounds were invited to the school to create in a judgment-free, play-based space. The school would host nights of printmaking, drawing, ceramics, movie nights, and “Drink and Draw”, where participants would be welcomed to an open bar to draw with other participants.

One of Mobil’s unique classes included “Exquisite Corpse”. This Surrealist art game asks participants to draw on a piece of paper and hand it to the next artist, but not before folding it up and hiding what they’ve drawn. The next participant, with no knowledge of what the person before them contributed, then adds their own creation to the mix. Once the paper is unfolded at the end of the game, the artists see the inevitably strange and interesting creations.

The connections formed playing the game made Somani realized the social aspect of art and creativity.

With his experience in tech-based startup companies, Somani was already in the industry of technology and entrepreneurship. Exquisite Corps very quickly became the jumping-off point for the creation of Mobil’s art and social app, EQ The Game.

“I talked to the developers that I’ve known for a while, and then it all fell into place once the designs were done,” Somani says. “We partnered with Emily Carr University of Art + Design, and so we were able to hire two Masters in Interaction Design students—April Nguyen and Thejus Kayanadath—to work with us. By February 2020, we had an app that we were internally testing, and the art we were seeing being produced was super interesting!” he adds.

Read the rest of the article on Stir

Learn about our partnership with Mobil Art School through here.