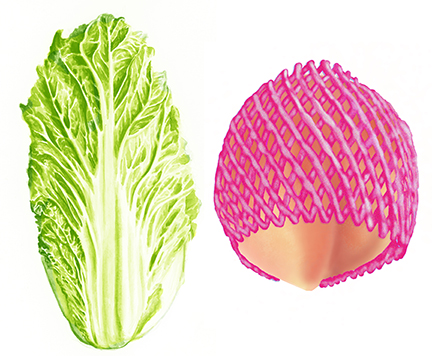 in/visible by Janet Wang
Presented as a temporary public work, In/Visible subverts the traditional Toile de Jouy motif with local and contemporary images that question development, displacement and the scale of our existence in the urban environment.

Groups and individuals consulted for the creation of the toile include:
Yulanda Lui, Youth for Chinese Seniors
False Creek Residents’ Association
The False Creek Residents Association
Hayne Wai, past president of the Chinese Canadian Historical Society of British Columbia
Kevin Huang, Executive Director, Hua Foundation
David Gowman is a long-time resident and artist in this neighbourhood.
Bruce Walther is a glass and mosaic artist who has lived and worked in the Downtown Eastside for over 25 years.

Janet Wang is a visual artist working within a traditional painting practice, integrated with sculptural installation practices and digital media.  She received her Bachelor of Fine Arts from the University of British Columbia and her Master of Studio Practice from the University of Leeds in England. Her work explores the construction of identity through the appropriation and disruption of social patterns and familiar gestures.  The artist extrapolates from the canons and traditions of history, both the artistic and the quotidian, in order to use the familiar as a meeting point with the viewer.

Her work has been exhibited in Canada, the United States, and the UK, and has been awarded residencies from the Arts Council of England, ArtStarts, the Burnaby Arts Council, and received the Visual Arts Development Award by the Vancouver Foundation. She is currently is an instructor at the Art Institute of Vancouver.