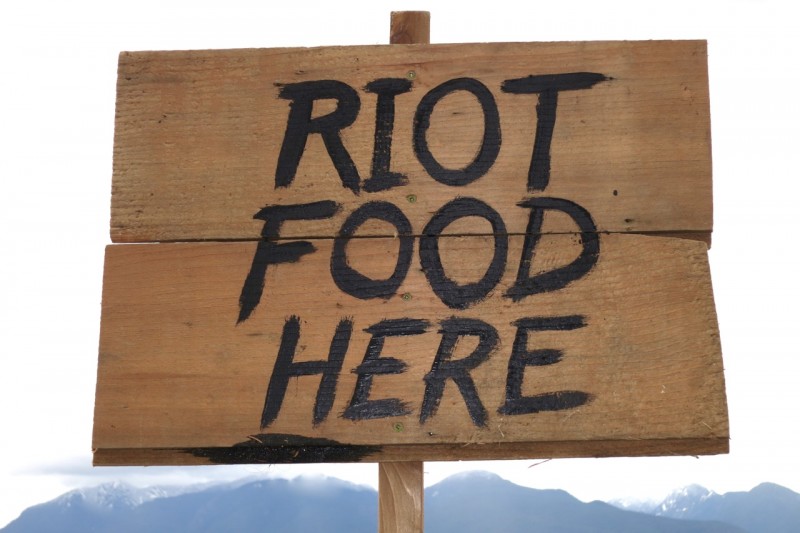 Riot Food Here recalls the 1907 anti-Asian riots through the form of food offerings in 4 locations over 4 weekends. These sites track the route of the demonstration organized by Vancouver’s Asiatic Exclusion League from which a mob formed to attack Chinatown and Nihonmachi. The tastings, created by chef Kris Barnholden, reflect five cuisines that people in the area would have been eating at the time of the riot: European, Chinese, Japanese, Aboriginal and Punjabi. The project launches with a walking tour (sorry, no food that day) led by Michael Barnholden, author of “Reading the Riot Act: A Brief History of Riots in Vancouver.”

Riot Food Here stimulates dialogue and awareness of this historic event as a way to reflect upon the ongoing struggle since colonial times about who has the right to live and eat here.

All events 2 – 4pm or until the food is gone

Henry Tsang is a visual and media artist and occasional curator based in Vancouver. His artworks incorporate digital media, video, photography, language and sculptural elements that follow the relationship between the public, community and identity through global flows of people, culture and capital. Projects include Maraya, an eight-year collaboration that investigates the reappearance of Vancouver’s False Creek in Dubai as the Dubai Marina; Orange County, and Olympus, shot in California, Beijing, Torino and Vancouver, exploring overlapping urban and socio-political spaces; and Welcome to the Land of Light, a public artwork along Vancouver’s seawall that underscores Chinook Jargon, a 19th Century local trade language, and the English that replaced it. Curatorial projects include Self Not Whole: Cultural Identity and Chinese-Canadian Artists in Vancouver (1991); Racy Sexy (1993); and City at the End of Time: Hong Kong 1997 (1997). Henry is an Associate Professor at Emily Carr University of Art & Design.

Riot Food Here is part of Ten Different Things, a series of public art commissions in Vancouver that engages ten artists to investigate the role of culture as a critical ingredient in the construct and vitality of the contemporary city. Ten Different Things is a collaboration between CityStudio Vancouver (Janet Moore and Duane Elverum co-founders) and Living Labs at Emily Carr University of Art + Design, curated by Kate Armstrong and supported by the City of Vancouver Public Art Program.

Ten Different Things is produced on the traditional unceded Territories of the Musqueam, Squamish and Tsleil-Waututh First Nations.